How 'Minding The Gap' Embraces Skateboarding's Vulnerable Side 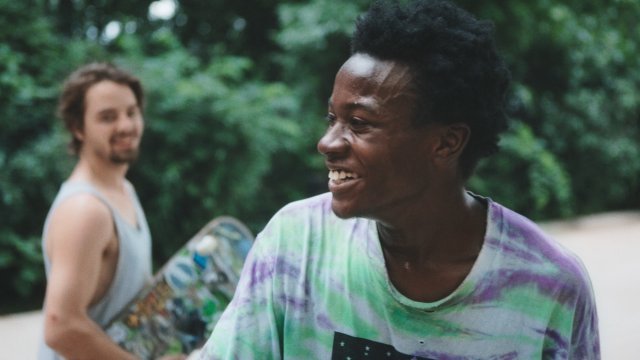 Bing Liu's new documentary "Minding the Gap" is an emotional portrait of three skateboarding friends – himself included. Filmed over 12 years, the coming-of-age documentary takes place in recession-hit Rockford, Illinois, where he and his two friends, Zach and Keire, skateboarded their way out of violent households. And while Liu's beautifully-filmed skateboarding scenes set the film's tone, his extraordinarily candid documentary explores themes way beyond skateboarding.

"Minding the Gap" won the Jury Award for Breakthrough Filmmaking at Sundance last year. The critically acclaimed documentary is currently available on Hulu and in select theaters.

The 29-year-old director and cinematographer talked about his film with Newsy's Ben Schamisso.

NEWSY'S BEN SCHAMISSO: What did you want to achieve with "Minding the Gap?" BING LIU: I wanted to make something that would help my younger self survive. I wanted to have more stories about abuse in the household and toxic ways of dealing with that. For me, the real message of the film was always, you know, what does it mean for skateboarding to have a point of diminishing returns. You know, can it help you become a father? Can it help you get a GED? No, it's great for catharsis, but, you know, I think it has a point where it just can't solve — it's not a panacea.

SCHAMISSO: How was that relationship between you as the filmmaker and them as the subjects, because they are showing you so much of their vulnerabilities?LIU: You have to think about power dynamics. Documentary is different from journalism in that you're spending sometimes years with people and you're asking a lot from them. And if it's somebody who doesn't have a lot of power, you have an obligation to include them in whatever way possible, to give them back a little bit of power. I told them all early on that we were going to show them the film before it was ever released to a wide audience.

SCHAMISSO: I'm wondering if, in a way, documentary filmmaking is, for you, a healing process?LIU: I think real healing comes from being uncomfortable. I don't think I felt as uncomfortable as, you know, some of the people who gave a lot of themselves in the film felt. Partly that was because no one was pressing me. I was, like, I was sort of pressing other people to try to make sense of their lives.

SCHAMISSO: Did you feel that because Keire and Zach revealed so much of themselves and their past and their abusive relationships that, you know, it would be unfair for you not to reveal the same kind of stuff?LIU: I needed to put skin in the game of my own, and, you know, I mean, what makes a character work, I think, in a story, it's vulnerability. And it's sort of impossible to look in a mirror and be vulnerable. And this is part of why the conceit of the cameras and having cameras film me. So I had to find a way to, I guess, not have control over something in the film.