How Mass Shootings Have Rattled The American Jewish Community 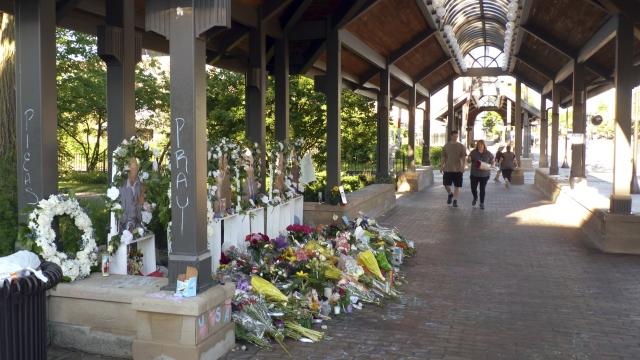 SMS
How Mass Shootings Have Rattled The American Jewish Community
By Newsy Staff
By Newsy Staff
August 4, 2022
Many recent mass shootings have largely hit Jewish communities, and now the communities have had to come to grips with tragedy.

It’s been exactly one month since a gunman opened fire at the 4th of July parade in the Chicago suburb of Highland Park. Seven people died in the attack, with dozens more suffering injuries.

The shooting rocked the community, with a diverse set of victims. They included a 78-year-old Latino grandfather, a 63-year-old Jewish synagogue employee and a couple in their 30s who died protecting their two-year-old son.

These communities found strength in the aftermath of mass shootings. In a lot of those cases, it comes from houses of worship. In recent years, many attacks have hit largely Jewish communities.

Roughly half of Highland Park’s population is Jewish. To be clear, law enforcement officials have not announced a motive for the shooting, but posts connected to the suspect have included hateful comments about multiple minority groups, including Jews.

Regardless of the motive in Highland Park, a rise in the number of anti-Semitic attacks have left American Jews on edge.

A survey released in April by the Jewish civil rights group the Anti-Defamation League found that anti-Semitic incidents hit an all-time high in 2021, with the number of incidents nearly tripling since 2015.

These fears translate into tragedy and loss of life. In the last few years, there have been several attacks on synagogues in the U.S.

In January, a gunman took four people hostage during a service at the Congregation Beth Israel synagogue in Colleyville, Texas.

In April 2019 on the last day of the Jewish holiday of Passover, an openly anti-Semitic shooter killed a woman and wounded three others, including a rabbi, at the Chabad synagogue in Poway, California, not far from San Diego.

That attack followed an attack in October 2018, where a shooter with anti-Semitic beliefs killed 11 people and wounded six others in a shooting during a Saturday morning service at the Tree of Life synagogue in the heavily Jewish Pittsburgh neighborhood of Squirrel Hill.

Three congregations shared the synagogue, all of whom had to come to grips with tragedy.

"We knew that obviously something terrible had happened, and we sort of knew who," said Stephen Cohen, New Light Congregation co-president. "It was the terrible things that happened, too, but it wasn't until later in the evening that the coroner's office actually was willing to release and confirm who survived and who did not that day. The following week was spent attending funerals."

New Light Congregation lost three of its members that day – Richard Gottfried, Daniel Stein and Melvin Wax. Each of the congregations that had been using Tree of Life Synagogue moved out.

But in the weeks afterward, members still sought the connection to their faith.

"People were looking for reassurance that we were all still going to be able to be together," Caplan said. "They wanted the reassurance we could still be there to hug each other, be there for services."

In Squirrel Hill, healing has become more than just a matter of faith. Government officials, synagogues and nonprofits came together to form a partnership that provides mental health options to the community.

"There's really no one way to heal," said Ranisa Davidson, 1027 Healing Partnership program manager. "There's no one right way to heal, so what works for somebody is not going to work for another. When you have a community trauma like the mass shooting that occurred in Pittsburgh, it's hard to find ways for an entire community to heal."

That healing can cut across communities and bring places that suffered tragedy back together. In Squirrel Hill, members who were invited to Mother Emanuel Church in Charleston, South Carolina, which suffered a mass shooting of its own in 2015, remembered how connected they felt.

"The pastor called us up to the front of the room, and we expected him to say benediction or something nice," Cohen said. "Instead, he called up the entire congregation to come and hug us. There must have been about about 500 people in the room, and we are probably about 10 to 15 individuals. We were just surrounded by love, by compassion, and it's events like that that make you feel that you know that we are family, that we are all one. We are all trying to face this together and to try to move on."

Synagogues have a role to play in healing for the community, even when the attacks aren’t explicitly anti-Semitic.

They can provide help in the weeks, days, sometimes even the immediate moments after a mass shooting.

Rabbi Bradd Boxman of Congregation Kol Tikvah in Parkland, Florida saw that firsthand when his synagogue became an emergency place of refuge during the 2018 mass shooting, less than a mile away from Marjory Stoneman Douglas High School.

"When it all began, because we're only a half a mile from the synagogue and the synagogue being a vibrant center for our youth in the first place, they thought to run to the synagogue, even though the non-Jewish kids went to Dunkin Donuts and 7-Eleven and other places," Rabbi Boxman said. "Our kids came here. They knew that this would be their they're their their home where they could be taken care of."

Rabbi Boxman said that a rabbi has a major role to play in guiding communities through the immediate aftermath. Parkland, similar to Highland Park, has a large Jewish population. Five of the 17 victims in the Parkland shooting were Jewish, and four of them had connections to the synagogue.

"I think in any trauma, you run on adrenaline," Rabbi Boxman said. "I learned as a rabbi that the most important thing I can do is to try to be the calm in the midst of the storm, and you deal with your pain and sorrow afterwards. But a leader, I think, has to kind of absorb a lot of that, and so just trying to get the families through the first days and weeks of mourning."

He’s quick to point out that it’s about more than just healing and care in the moment; congregations can also help push for change.

He and several young members who later helped organize the March for Our Lives movement against gun violence spoke with Florida officials and protested at the state legislature.

"I understand that they say that religion is there to to comfort the afflicted but also to afflict the comfortable," Rabbi Boxman said. "Coming out of the reform Jewish tradition, that's the prophetic tradition. I believe strongly that... we live by standing up for the values that we cherish, and if we just speak them idly in the synagogue, that they don't manifest themselves in real action outside the synagogue, then we are false to ourselves. So, we've had to walk a line."

Sometimes, that advocacy does lead to change. Florida passed a “red-flag law” to tighten gun purchases.

After Highland Park, the House of Representatives passed a ban on semi-automatic assault weapons, but that bill may not make it through the Senate.