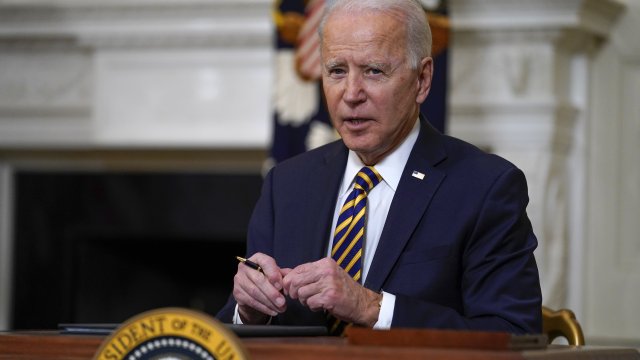 SMS
Where Does the Economy Stand After Biden's First 100 Days?
By Bianca Facchinei
By Bianca Facchinei
April 27, 2021
An economic recovery is in progress, but the president still has obstacles to cross in Washington before he enacts more financial reforms.
SHOW TRANSCRIPT

The concept of the first 100 days is widely associated with President Franklin D. Roosevelt. He was elected in the throes of the Great Depression, tasked with bringing the economy back to life in 1932.

This week, President Joe Biden will meet that 100-day mark while facing a similar scenario. He’s promised to turn the economy around, after the COVID-19 pandemic pushed millions into financial uncertainty.

"If we act now, our economy will be stronger in both the short and long run," President Biden said in January.

Traditional indicators show the economy is in recovery mode under President Biden: Unemployment has fallen 0.3 percent. Consumer prices are up. And the Atlanta Fed expects 8.2% GDP growth in the first quarter of the year.

But he hasn’t achieved everything he said he would in the first 100 days.

Raising the rate to 28%, up from 21%, would fund the administration’s $2 trillion infrastructure plan. But that proposal has plenty of critics in Washington.

“That’s not the right thing to do," said U.S. Sen. Steve Daines.

“A big tax increase is not the way to go," said U.S. Rep. James Comer.

“Now is not the time to raise taxes," said U.S. Rep. August Pfluger.

President Biden will provide more detail on his vision for the economy Wednesday, during his first address to a joint session of Congress. That includes his next big spending bill: the American Families Plan that includes investments in child care, paid family leave, and education.