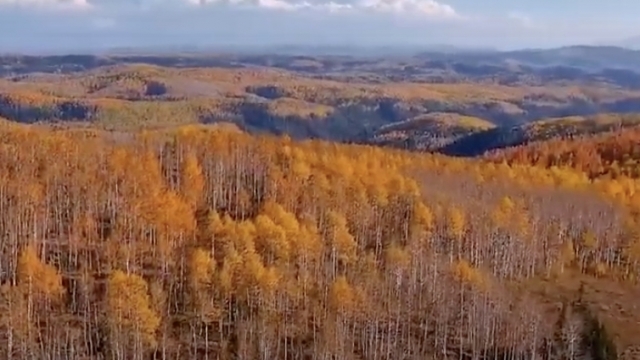 Climate change is extending summer temperatures into September and altering the fall foliage.

The yellows, oranges and reds of the fall foliage season are slowly expanding across the United States. The change from summer to fall as seen through tree leaves is changing at a different pace due to climate change.

The increasing global temperature is creating wetter and warmer areas of the country, which directly impacts the trees and their photosynthesis process.

"September is the most important month for determining the timing and quality of the fall color," said Howard Neufeld, professor of biology at Appalachian State University.

Climate change is extending summer temperatures into September, which alters the fall foliage. A shifting summer season will change the fall season.

"In a future high-CO2 world that is warmer, we may see a longer summer season," said Neufeld.

Higher air temperatures cause the atmosphere to hold more water vapor, which ultimately leads to more rain in areas.

Neufeld says warmer and wetter weather creates duller red-colored leaves. The red leaves are what really defines the beauty of the fall foliage season. The orange and yellow leaves will always exist because the pigments responsible for those colors are masked during the summer by the green of the chlorophyll.

Climate change will also change the makeup of the forests and the leaf canopy. The warmer weather will drive some trees to relocate to the north. There was a similar movement of Florida trees following the retreat of the glaciers.

"They can move — not like in 'Lord of the Rings' where they can walk — but through seed dispersal. If it's too warm in the South, then they'll have to move north," said Neufeld.

As the leaves shift from green to their fall colors, they are doing so at different time intervals because of the warmer temperatures.

"The intensity of the color is not as great because you don't get all the colors coming up at one time," said Neufeld.

The fall foliage tourism industry is estimated to pump $25 billion to $30 billion dollars into economies across the country each year.