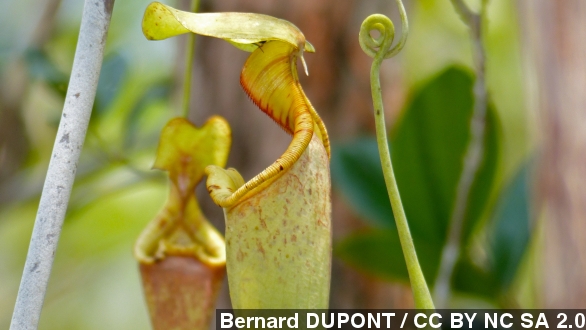 If you were already kind of creeped out by carnivorous plants like this pitcher plant, a new study detailing how exactly they trap their prey probably won't help.

That's because the study — which looked at the Nepenthes rafflesiana species — found that the plant is pretty crafty when it comes to trapping ants, its largest food source.

The plant takes advantage of the fact that ants are social animals. Instead of trapping every ant that comes by, it lets the scout ants escape and waits until the whole group shows up to spring the trap. (Video via National Geographic)

It does that by leaving part of its pitcher dry for the scout ant before wetting the pitcher when more ants show up, leading it to capture batches of ants instead of individuals.

The lead author on the study, Bristol University's Dr. Ulrike Bauer, has examined this kind of behavior in other pitcher plants, previously noting how plants adjust the slipperiness of their pitchers to trap more ants. (Video via Cambridge University)

As the study notes, the plant deactivating its trap from time to time to prevent capturing scout ants doesn't seem to make sense from an evolutionary perspective because presumably the plant would want to trap all the ants it could.

But by catching ants in batches through turning the trap on and off, ultimately the plant trapped more ants than always having the trap on — which means plants that had the on-and-off feature would have survived and reproduced more successfully. (Video via PBS)

The study makes a point of clarifying that it's a more viable strategy for larger plants than for smaller plants because larger plants have more pitchers and therefore a higher chance of catching batches of ants. (Video via Burke's Backyard)

The researchers also wrote the behavior helps explain why the ability to create a more slippery pitcher surface is present across species of Nepenthes.