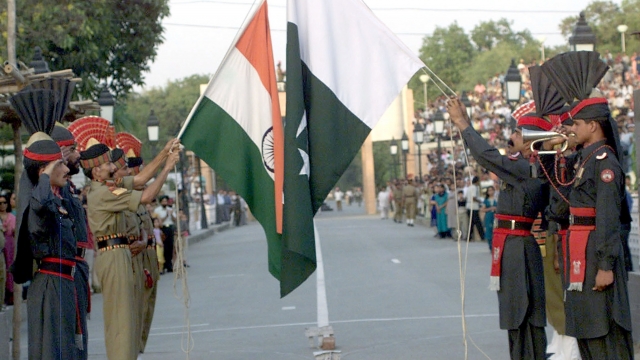 SMS
Amid Kashmir Dispute, Bollywood's Messages Carry More Weight
By Melissa Prax
By Melissa Prax
August 15, 2019
Some Indian movies — and their stars — have been accused of promoting war with Pakistan.
SHOW TRANSCRIPT

Bollywood, India's film industry, reaches audiences around the world. It's the No. 1 film industry on Earth when it comes to quantity of movies. But there's a running theme of pro-Indian nationalism in many of its films, and that may come at the cost of even higher tensions with Pakistan over Kashmir.

Take the film "Uri: The Surgical Strike." It's a dramatized retelling of a retaliatory military attack India carried out against Pakistan in Kashmir. It was one of the highest-earning Bollywood films of 2019. But viewers were divided on whether it promoted patriotism or nationalism. Indian Prime Minister Narenda Modi, whose party campaigned on asserting control over Kashmir, seems to have liked it — he used a slogan from the film in one of his speeches. But the Pakistani characters in the film are portrayed as clumsy and easily defeated. One Pakistani film critic boiled the film's message down to, "War is good, because REVENGE."

Another example comes from 2006 — the film "Fanaa," which features a love story between an Indian woman and a Kashmiri man. The man is depicted as an insurgent, which arguably perpetuates negative stereotypes of Kashmiris. For context, India has often cited security as a reason that it needs to maintain control in Kashmir.

Kashmir is a disputed territory claimed by both India and Pakistan, and they both effectively control parts of it. The majority-Muslim region has been at the root of several wars between the two nations. And recently, India's legislature moved to revoke Kashmir's semi-autonomous status, essentially giving itself more control in the border region.

Since that change passed, additional Indian troops have flooded into Kashmir and essentially put the region on lockdown. That's stoking fears that another war between India and Pakistan, which are now both nuclear powers, could be on the horizon.

And that brings us back to Bollywood.

Ongoing tensions over the years have inspired lots of Bollywood actors, actresses and directors to voice pro-Indian sentiments, including the patriotic saying "Jai Hind." It translates to "Victory to India," and it's kind of like the Indian equivalent of "God Bless America."

In February, Bollywood star Priyanka Chopra tweeted "Jai Hind," along with "#IndianArmedForces." She sent the tweet shortly after a Pakistan-based militant group carried out an attack in Kashmir, killing dozens of Indian security force members. Some people, including activists and Pakistan's human rights minister, perceived her tweet as a call for war.

And that led to this question posed by a Pakistani-American at a conference in Los Angeles: "It was kind of hard, hearing you talk about humanity, because as your neighbor, a Pakistani, I know you're a bit of a hypocrite. ... You are a UNICEF ambassador for peace, and you're encouraging nuclear war against Pakistan."

Chopra, who is a former Miss World, holds a unique position as a prominent Bollywood actress who also has widespread fame in the U.S. That fame has given her a variety of platforms and opportunities, including a role as a UNICEF goodwill ambassador.

This was Chopra's response: "War is not something that I am really fond of, but I am patriotic."

On Aug. 20, Pakistan's human rights minister wrote a formal letter to UNICEF asking for Chopra to be stripped of her ambassador role. The letter compared the current Indian government's principles to "Nazi doctrine."

A United Nations spokesperson responded two days later, noting: "For any Goodwill Ambassador, whether it's Ms. Chopra or anyone else, we expect them to adhere to impartial positions when they speak on behalf of UNICEF or any other organization. When they speak in their personal capacity, they retain the right to speak about issues of interests or concern to them."

As for Ayesha Malik, the woman who posed the question, she grew up watching Bollywood, including Chopra's movies.

"It's not just South Asians that watch Bollywood, [the films are] international. … I want Bollywood filmmakers to understand that they're not entertainers at the end of the day, they're educators. And they need to remember that what they do impacts the whole subcontinent, and therefore the whole world," Malik said. But Malik says she wants the international community to focus on the issue at hand, not on her interaction with Chopra.

"Now that I brought it up, I just want to pass the mic to real Kashmiris, cautionary reporters, because I want this to stop being about me and more about the people that are in the humanitarian crisis right now," she said.

As the Kashmir conflict continues, Bollywood directors are taking note — and some are taking inspiration. In late February, Indian Air Force pilot Abhinandan Varthaman's plane was shot down over Pakistan-controlled Kashmir. By early March, a director had applied for the rights to use "Abhinandan" as the title of his film — and the pilot hadn't even returned home yet. An Indian film critic told The Guardian, "Never mind applying for titles before the tensions have even abated, people start writing scripts the next day."