How An Artist's 'Peace For Paris' Symbol Went International 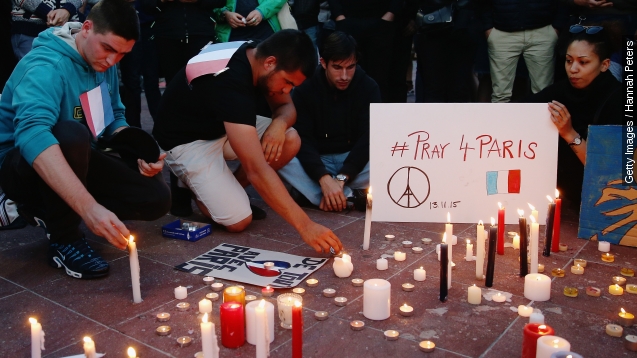 A French graphic designer's quick drawing has become a worldwide symbol of solidarity following the attacks in Paris.

After Friday's attacks in Paris, people shared their thoughts, frustrations and feelings on social media.

The overall sentiment was sadness, and though there were those who posted messages of hate, the message capturing the most attention was "Peace for Paris."

Jullien told Wired that it was very natural for him to connect the two symbols.

"It was my way of communicating with the people I know and showing that I was thinking about everyone affected in Paris," he said. "The fact that people shared it and used it, well, in a way that's all for the better."

Overnight, users all over the world took up the "Peace for Paris" symbol to show solidarity — and of course — promote peace.

Friday night in New York City, a group of roughly 70 people, most French exchange students, gathered in Union Square for a vigil. They circled around the Peace for Paris sign.

The symbol also made its way into sporting events, like the final round of the BMW Masters in Shanghai, China. In the U.S., Ohio State's quarterback wore the sign on his shoe.

About four hours east of Paris, in Nancy, France, a group of more than 200 people gathered Saturday outside the Place Stanislas to form the symbol.

Jullien is probably used to seeing his work on a large scale. He's done work for The New Yorker, The New York Times, Nike and BMW. And in January, following the Charlie Hebdo attack, his work also got a lot of international attention.

But this time, Jullien's artwork could stand for even more. Because during such an ugly event, the symbol is a positive message and will likely be remembered for years to come.