How A Same-Sex Marriage Vote Could Change Northern Ireland 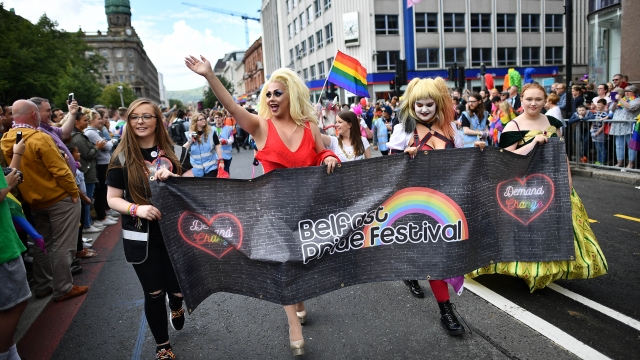 On Tuesday, British Parliament overwhelmingly approved a bid to legalize same-sex marriage and extend abortion rights in Northern Ireland. But, that doesn't mean it will necessarily happen. It's on the condition that Northern Ireland isn't able to re-establish its own government in the next three months.

Northern Ireland hasn't had its own government since 2017, and the effort to restore it since then hasn't gone well. The region now holds the world record for the longest amount of time without a sitting government. Let's get into that:

That requirement to have both groups in the assembly is why Northern Ireland hasn't had a government for two and a half years. Sinn Féin— the Irish Nationalist party — withdrew from the assembly after disagreements with the Democratic Unionist Party, causing the government to dissipate until the parties can agree to work together again.

So back to Tuesdays vote: The abortion and same-sex marriage votes are amendments tacked on to a bill that keeps Northern Ireland functioning without a government.

The problem is those two main parties are at odds when it comes to both issues: The Sinn Féin is in favor of same-sex marriage and abortion rights; the DUP is against them. In fact, Northern Ireland is the only part of the U.K. and Ireland to not allow same-sex marriage, and that's because the DUP has continually blocked it. Now the DUP says parliament's vote on these amendments is unfair because it gives Sinn Féin incentive to not restore the government. But keep in mind, the DUP's faced criticism for wanting to be part of the U.K. when it comes to things like Brexit but then claiming to be separate on other issues.

If Northern Ireland's assembly isn't restored by October 21, the bill — along with the controversial amendments — goes to the House of Lords, where it is expected to be approved.