Art As Protest: How One Artist Uses Portraits To Confront Injustice 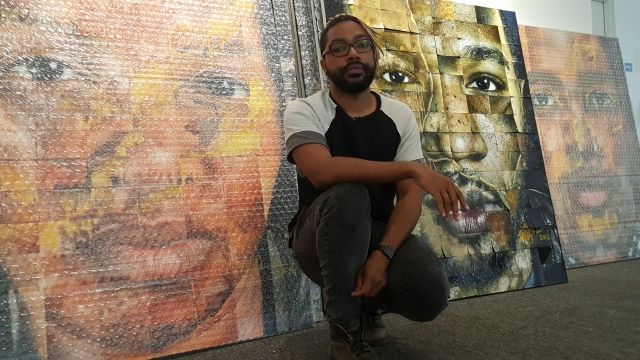 SMS
Art As Protest: How One Artist Uses Portraits To Confront Injustice
By Sadé Carpenter
By Sadé Carpenter
October 25, 2016
A Chicago artist turns his art into activism in order to honor blackness and protest police brutality.
SHOW TRANSCRIPT

Artist Ervin A. Johnson's mixed-media portrait series, #InHonor, is his response to police brutality and injustice. His work was featured in a 2016 Summer Alumni Residency exhibition at Columbia College in Chicago.

He describes the work as his own form of protest.

"A lot of my friends got up and went out, and they would always call me and be like, 'Do you wanna go to the march?' And I decided not to go, and I always had an excuse — I was sick, I was tired, something," Johnson said. "And so I decided that I had to do something and that I would best be of service via art."

Newsy's Sadé Carpenter spoke to him about the project and his personal form of activism.

NEWSY'S SADE CARPENTER: So, Black Lives Matter started as a hashtag, and In Honor — there's #InHonor. That, I'm assuming, was very intentional.

ERVIN A. JOHNSON: Yes. Yes it is. With the emergence of Black Twitter and seeing how powerful it actually is … I wondered if I could make something visually interesting and interject it into that conversation and have it be of service for the movement.

CARPENTER: Take me through how you create one of these.

JOHNSON: I like to utilize a movement called abstract expressionism, and with that you have to physically exert force into the canvas. So you're like being rough with it, stepping on it and all that type of stuff. … The first step is always to renegotiate the ink with various solvents. So you can see kind of remnants of that here, where like the pigment is not there anymore.

CARPENTER: What's the symbolism of removing the pigment?

JOHNSON: So for me, skin — our skin is literally what I guess people define our blackness as. So removing that in an aggressive way, for me, mimics the violence done to black bodies.

CARPENTER: How aggressive — like, literally you're throwing the acid or …?

JOHNSON: Throwing the bleach or whatever I'm using, walking over the face. So like for me, the whole thing requires physical effort. At the beginning I have to put the face together. So it's just kind of like this 'care for your brother, care for your sister' type of thing. And at the end I've put this being together, and I've cared for it in a way after the violence.

CARPENTER: Is it cathartic or healing at all for you? What are you thinking when you're doing that?

JOHNSON: I think it's equally healing and equally frustrating. … I think there's something to be said for, like I said, the physical effort of having to do this, but then also at the end of the piece realizing why I'm doing this and the fact that this violence is continuing. … When I started this residency, the day before, Alton Sterling was murdered. And it's just like this constant wake-up call of, 'Is this really affecting people? Am I doing something?' It's … yeah.

JOHNSON: Being called to action doesn't always mean being violent or marching and protesting. It just means that you speak up and say something — stand firm in how you feel about it.