How A Blood Test Could Detect PTSD In Pregnant Women 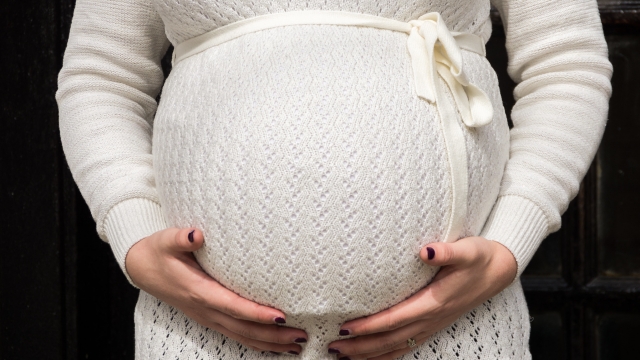 At the moment, pregnant women are only checked for depression. But the discovery of "biomarkers" could help detect PTSD via blood tests.

GRAZIANO PINNA: "This is technology that was developed for the first time here in our laboratories."

Here at this University of Illinois at Chicago lab, Granziano Pinna is working on research that could change the way post-traumatic stress disorder, or PTSD, is currently diagnosed and treated. Someone who has experienced trauma won't always develop PTSD...

...But women are much more likely to develop PTSD than men. And Pinna and Boston University researcher Yael Nillni are narrowing their focus on expecting moms.

YAEL NILLNI: "Women with PTSD are just at a greater risk for negative outcomes during pregnancy.So things like preterm birth or low birth weight and postpartum depression, but we don't really understand why and I think that's a huge question mark right now."

Currently, PTSD can only be diagnosed by a doctor, psychologist, or psychiatrist. A person needs to exhibit four types of symptoms: re-experiencing a traumatic event, “fight or flight” reactions, and cognition or mood changes.

But it can still go undiagnosed — because health care can be costly, or symptoms could overlap with other mental illnesses. And at the moment, pregnant women are only checked for depression.

NILLNI: "In prenatal clinics right now they're really doing a great job in implementing depression screening. Widening our screening would be really important to other mental health problems like PTSD, and getting people in treatment before especially while they're pregnant. … That could really help prevent some of the postpartum depression."

The researchers say screening for PTSD — and potentially other mental illnesses — could be easier and more accurate with the discovery of biomarkers. Currently, biomarkers can be used to detect diseases such as diabetes or autoimmune diseases in blood tests.

PINNA: "The field of psychiatry is generally backward as compared to other fields of medicine, where they have relied strongly on biomarker assessment … This is also a reason why treatment for PTSD is not as efficient as it should be."

An accurate diagnosis is important but so is personalized treatment — especially for pregnant or breastfeeding women.

PINNA: "There is no cure for PTSD. … The treatment of PTSD relies on the Selective Serotonin uptake inhibitors. So SSRI's such as Prozac.”

In the more than 30 years since Prozac’s debut, the medical community has become more skeptical about its effectiveness. And there haven’t even been any new drug treatments approved by the FDA.

So how exactly is Pinna figuring out a biomarker for PTSD?

He points to a steroid the body creates called allopregnanolone, or allo. Studies show allo levels are lower in the blood and cerebrospinal fluid for people with several mental illnesses.

PINNA: "When allopregnanolone levels decrease in animal models or patients with psychiatric disorders, we have the appearance of behavioral dysfunction of PTSD symptoms for example. So this is really a very important finding, because it points allopregnanolone as a possible biomarker for this disorder."

In March, the FDA approved an IV drug for postpartum depression — the first of its kind. It was developed using a synthetic form of allo.

And it sheds some light on what could be on the horizon for treatment of PTSD as a whole.

PINNA: "It's very important to decrease stigma, that is associated with psychiatric disorders. So biomarkers are also an advantage on the social level, and making people are affected by this disorder and be more accepted by the community."