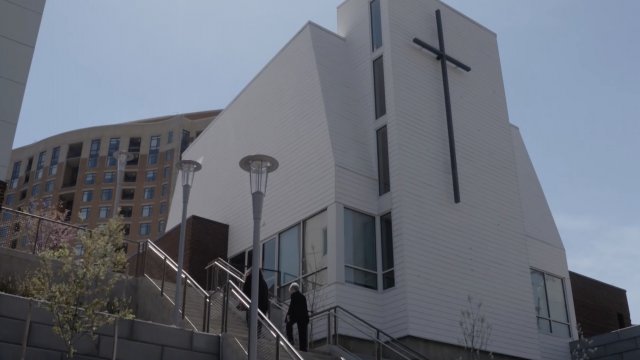 SMS
Houses Of Worship Are Becoming Houses Of Hope For Low-Income People
By Amber Strong
By Amber Strong
April 20, 2022
A sought-after Virginia neighborhood that once held a church is now filled with affordable housing.

For nearly 60 years, a spot that is now occupied by apartments in Alexandria, Virginia, was home to the Episcopal Church of the Resurrection.

"I always get teary eyed on this, but I think for all of us, certainly, I felt it was a faith journey," said Betsy Faga.

Ten years ago, church leaders like Faga noticed declining membership, along with a big empty building and a growing community need.

"We've had a food pantry for a number of years now, and so at least during the food distribution, before we made some decisions, you know, the people working there would ask, 'What what do you need?'" Faga said. "And it was always, you know, food and shelter."

So, they worked with a developer to lease the land, demolish the church and build the 113-unit apartment building, along with a new ecologically friendly church.

"Our developer was kind enough to agree to pay the full ground lease upfront, and that's the money we used to build the church," Faga said.

They also got hundreds of new neighbors in the process.

For many churches, it isn’t just about loving your neighbor, but being good stewards of land that typically goes unused for decades.

"Anywhere from 48,000 to 180,000 units of rental housing could potentially be built on the land just in those five jurisdictions in the DMV region," said David Bowers, senior adviser of the faith-based development initiative at Enterprise Community Partners.

According to Bowers, that combined with declining memberships nationwide makes churches the perfect solution to a growing housing problem.

"When you've got so much need and you've got a community that's sitting on a resource, that could be activated to meet that need," Bowers said. "Why would we not work with them to try to help activate that land?"

In Atlanta, Greater Piney Grove Baptist Church pastor William Flippin Sr. recognized the possibilities years ago, with a dream to use 50-plus acres of unused church property to build affordable housing for seniors. Now they're looking at a waiting list of over 7,000 people.

A recent report from the Federal Reserve called Atlanta "unaffordable" based on the median income.

"The housing rates are going up," said pastor Chianti Harris, executive director of The Grove CDC. "Taxes are going up. The incomes are not. Investors have come in and pretty much scooped up a lot of the housing of the person who could possibly almost afford housing."

"A lot of the language can make your eyes cross," Harris said. "It’s like reading the King James version at midnight."

"Sometimes the zoning may restrict what can be done where a house of worship is," Bowers said. "And so the ability to build residential or how much residential can be built — sometimes that's a barrier."

"People would refer to the people who were going to live there in pretty insulting manners, describing people as scary folks," Luehrs said.

The group was looking to turn a former church building into dormitory style living for unhoused people, but it took some convincing.

"We put together a good neighbor agreement, so that basically means we, as owners of this property, intend to be good neighbors to all those in the surrounding area," Luehrs said.

Pepperdine professor of theology and sustainability Chris Doran says for churches that are able to pull it all off, there can be an ecological upside.

"When you do renovation efforts and you can make things more energy efficient, you can deal with water treatment systems or water storage systems," Doran said. "You can think about redoing electricity to have solar panels or geothermal energy."

There are also the ethical benefits.

"One of the residents who moved into the building said, 'This is the most dignified I feel in years,'" Luehrs said.

"God is not dropping ramen noodles in the sky," Harris said. "He's giving us opportunity through what we do with ministries to be able to serve the people."

The team at the Episcopal Church of the resurrection agrees.

"All the passages we know from the bible of God saying, 'Love thy neighbor,' and our purpose is to help take care of our neighbor," Faga said.

It's a nonconventional approach to one of the oldest commands.