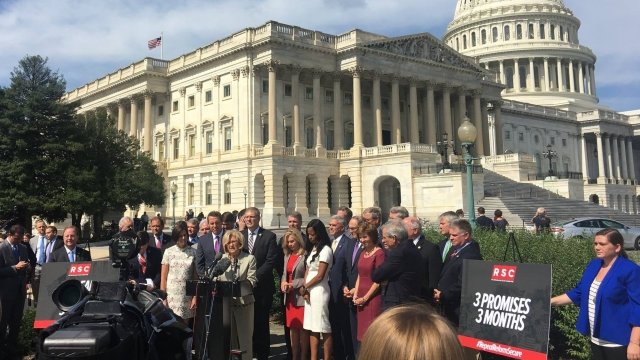 The budget includes up to $203 billion in spending cuts.

With 219 votes against 206, House Republicans just narrowly passed their 2018 budget.

The budget — which has heavy support from President Donald Trump — includes up to $203 billion in spending cuts and paves the way for major tax reform.

"The House budget, passed out of committee with unanimous Republican support in July, begins to address our spending addiction by balancing the budget over 10 years, so that we can start paying down our national debt. And it addresses mandatory spending in a significant way for the first time since 1997," House Budget Committee Chairman Diane Black said.

Beyond paying down the budget, the GOP's plan also focuses on Obamacare repeal-and-replace legislation, national defense funding and Medicare protection. The budget, however, reportedly cuts Medicare spending by almost $500 billion over a decade.

House leadership wants to pass something before August recess, but it's looking less and less likely.

The Senate is currently working on its own budget resolution, which would give both chambers the ability to pass tax reform without Democratic support. That plan could reportedly add up to $1.5 trillion to the deficit over a decade.

Many Republicans argue economic growth over the next 10 years will make up for that, but many economists say that's not the case.

In a survey conducted by Bloomberg, 21 out of 26 economists surveyed predicted the tax plan could widen the budget gap, as well as add to the more than $10 trillion rise in federal debt predicted over the next decade.