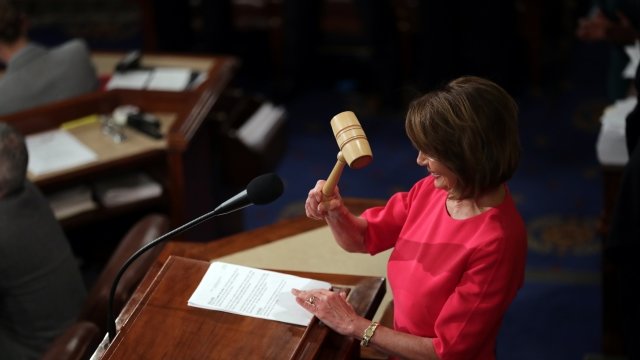 SMS
House Votes On Bills To Reopen Government
By Ahmed Jawadi
By Ahmed Jawadi
January 3, 2019
The package will fund several government agencies including the Departments of Justice, Agriculture and Commerce.
SHOW TRANSCRIPT

The House voted late Thursday night to pass a legislative package to reopen the government without border wall funding.

The package includes a bill that will fund several federal agencies through the end of September, including the Departments of Justice, Agriculture and Commerce. The other bill will maintain funding for the Department of Homeland Security through Feb. 8.

House Speaker Nancy Pelosi spoke earlier in the day regarding funding for President Donald Trump's border wall, which has been a sticking point that began the government shutdown nearly two weeks ago.

Despite the bills passing in the House, Senate Majority Leader Mitch McConnell said the Senate — which is controlled by Republicans — will not vote on anything that doesn't have a chance of getting the president's signature. The White House released a statement earlier on Thursday formally opposing the two bills, saying the legislation provides "unnecessary funding for wasteful programs while ignoring the Nation’s urgent border security needs."