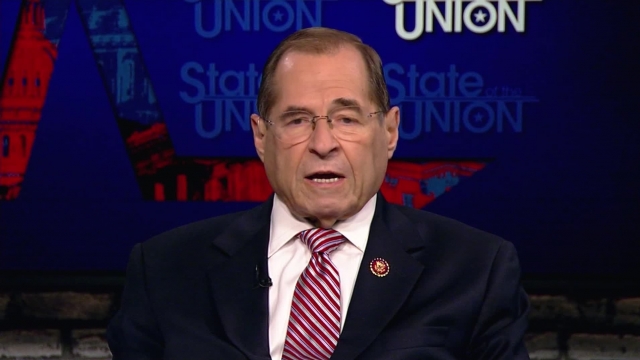 SMS
House Judiciary Committee Conducting 'Formal Impeachment Proceedings'
By LeeAnne Lowry
By LeeAnne Lowry
August 9, 2019
Chairman Jerry Nadler says the committee plans to vote by the end of the year on whether to bring articles of impeachment to the House floor.
SHOW TRANSCRIPT

He told CNN: "We are investigating all the evidence, we're gathering the evidence, and we will at the conclusion of this, hopefully by the end of the year, vote articles of impeachment to the House floor or we won't. That's a decision that we'll have to make."

Here's what that process looks like: Nadler says articles of impeachment have already been referred to the Judiciary Committee, but the committee may draft its own to "more closely fit the evidence."

Then, as Nadler mentioned, the committee will decide whether to bring those articles of impeachment to the House floor. The Constitution specifies that the House of Representatives has the "sole power" to impeach an official.

It's important to note: Impeachment is the process, not the outcome. If it goes to the House floor and a simple majority of representatives vote yes, then the president is impeached and the process would move on to the Senate.

The Senate would hold a trial and essentially act as the jury, while some House members act as prosecutors. Supreme Court Chief Justice John Roberts would be the judge. A two-thirds majority is required for the Senate to convict.

To put it simply: If the articles of impeachment make it to the House floor, they have a good shot of being voted through. But, the president is unlikely to be convicted in the Republican-majority Senate.

That's why House Speaker Nancy Pelosi has been resistant to moving forward with the process without bipartisan support. Nadler said the committee isn't waiting for Pelosi's go-ahead, but that she's been cooperative with the process.