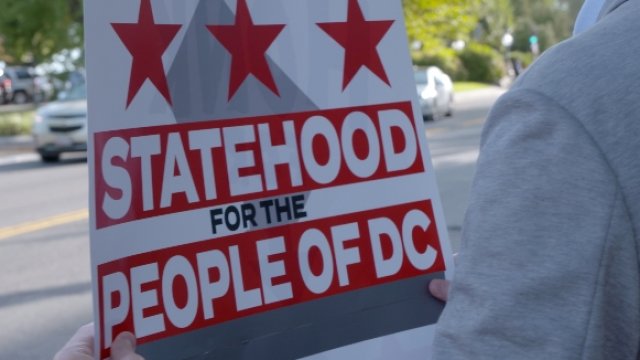 For the first time in 26 years, D.C. statehood is getting some real attention on Capitol Hill.

D.C. Congresswoman Eleanor Holmes Norton chaired the first House hearing on the issue since 1993. She introduced legislation that would make Washington, D.C., the 51st state.

"It should not matter what our politics are or what yours are. That's beside the point. The point is that to continue to deny statehood to 702,000 residents is a failure of this body to uphold their oath of office," said D.C. Mayor Muriel Bowser.

The last congressional vote failed when two-thirds of the House voted "no." If D.C. were to become a state, the federal government would still control areas like the Capitol, monuments and National Mall.

Mayor Bowser highlighted a host of issues as she defended her city's right to become a state, from sending people to war but not getting an actual congressional vote on going to war to following laws and decisions made by officials who are Senate-confirmed. D.C. has no voting senators. The federal government also controls local issues in Washington, D.C., like whether marijuana sales can be legalized or taxed. Bowser recently hung flags all over the city. They have 51 stars.

D.C. is bigger than all states but Oklahoma at the time they were admitted, and the city pays more in federal taxes per capita than any state and more federal taxes than 22 states.

Opponents of statehood say what D.C. needs is a Constitutional amendment — which must be ratified by three-quarters of the states — to become a state, not a new law.

But Rep. Gerry Connolly points out West Virginia was carved out from Virginia through an act of Congress.

Opponents believe the nation's founders created a federal city to avoid giving D.C. unfair influence, given its proximity to power. Rep. Jamie Raskin, who is also a professor of constitutional law, disagreed.

But the city has been disenfranchised in one way or another for decades. After all, D.C. only got the right to vote for president in 1964, got a non-voting member of Congress in 1970, and the right to elect a mayor and council in 1973. It didn't elect an attorney general until 2014.

D.C. statehood would mean two senators and at least one representative. The district has a higher population than both Wyoming and Vermont. As of 2016, 76% of registered voters there are Democrats; 6% are Republicans. Connolly says that is why Republicans won't support statehood.

Even if the House passes this bill, it's unlikely to be taken up by the Senate.