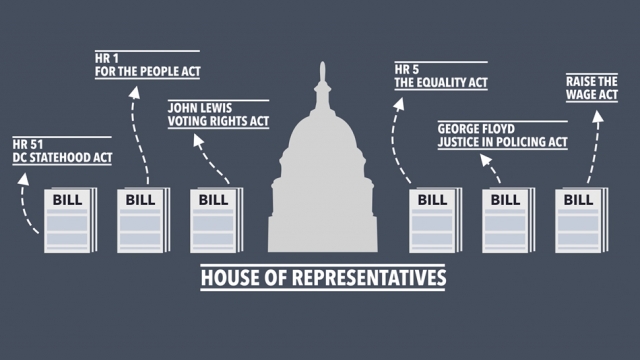 SMS
Dead On Arrival? Democrats Push Bills All But Certain To Die In Senate
By Nathaniel Reed
By Nathaniel Reed
March 3, 2021
House Democrats will pass multiple bills this month that failed in the last Congress' GOP-controlled Senate.
SHOW TRANSCRIPT

Less than two months into the Democratic Senate majority, a major reality check is imminent.

In the House of Representatives, Democrats will pass multiple bills this month which died in the last Congress, with the Senate under Republican control.

The list includes an update on the Voting Rights Act, raising the minimum wage, D.C. statehood and new rules for policing.

Senate Majority Leader Chuck Schumer of New York has repeatedly said he’ll push them to a vote, even though Senate Democrats know they don’t have enough support to pass.

The vast majority of legislation in the Senate requires 60 votes to pass, or get blocked by the legislative filibuster.

That’s 10 more votes than Democrats have, and some fear bringing up doomed bills to the floor could backfire.

“In trying to put Republicans on the record, they might also put their own members in a tough spot,” said Rick VanMeter, a former communications director for Republican Sen. Roger Wicker of Mississippi and the founder of Prevail Communications.

To pass these bills without Republican support would require killing the 60-vote threshold, which can be done only if all 50 Democratic senators vote to remove it.

But a handful of moderate Democrats remain staunchly opposed, including Joe Manchin of West Virginia.

“Never!” Manchin shouted earlier this week, in response to a question from reporters about whether he had changed his opposition to removing the legislative hurdle. “Jesus Christ,” he continued, “what don't you understand about 'never'?”

Without removal of the filibuster, it could be a long time before many Democratic legislative priorities could become law.

“In the Senate, because of the 60-vote threshold, you really need bipartisanship to pass legislation,” VanMeter told Newsy.