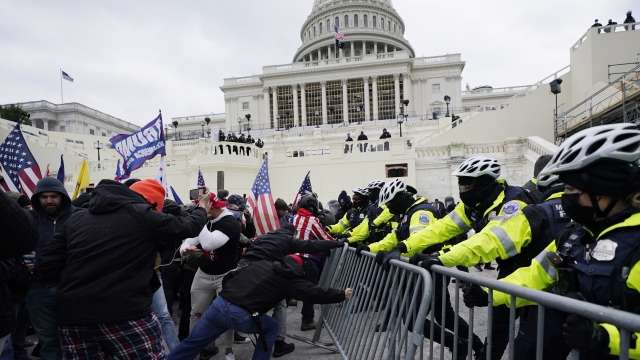 The House of Representatives approved a plan creating a national commission to look into the Jan. 6 insurrection, despite opposition from the House Republican Leader.

The bill would establish a 10-person commission, with Republicans and Democrats appointing an equal number of members. The group will have subpoena power, and any subpoenas issued must have bipartisan support.

The commission would be charged with investigating the facts and causes of the Jan. 6 domestic terror attack at the Capitol, including the "influencing factors" that led to the riot.

The congressmen who negotiated the deal, Democrat Bennie Thompson and Republican John Katko, say that phrasing leaves the door open for the commission to consider events beyond what happened on Jan. 6.

"So I trust the good people who make up this commission. I trust the staff of the commission to do what's in the best interest of determining the facts and circumstances around Jan. 6," said Thompson.

House Minority Leader Kevin McCarthy said that's not enough. He put out a statement opposing the commission, saying the members should be able to investigate a broader scope of political violence. McCarthy also believes the probe could interfere with ongoing criminal investigations — an idea that's disputed by the top Republican negotiator.

"Criminal investigations always reign supreme, and there are safeguards built into the system. ... What we're looking at, in my opinion, more important than anything is how did this happen? How did we fail to act on the intelligence that we knew was there?" said Katko.

Some Democrats said they were stunned by McCarthy's statement.

"I'm looking at the minority leader's statement, and I'm pissed, to be honest with you. Because I'm also looking at the letters that he sent to the Speaker throughout this process, expressing concerns about provisions that he wanted to be addressed. And both Mr. Thompson and Mr. Katko have addressed every single one of these concerns," said Rep. James McGovern, chairman of the House Rules Committee.

The bill now heads to the Senate for approval, where at least a handful Republicans have voiced support for a commission focused on Jan. 6, as long as it's bipartisan effort.