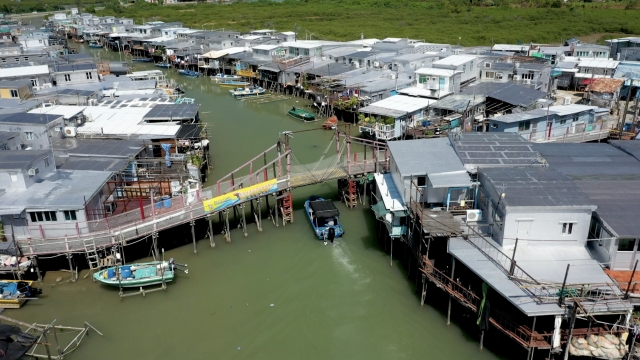 Tai O – Hong Kong's last traditional fishing village and one of its most popular tourist spots – is facing an uncertain future due to the effects of global warming.

The remote village at the edge of Hong Kong's most mountainous island, Lantau, is dubbed "The Venice of Hong Kong."

Visitors come to the remote there to step back in time, enjoy locally caught seafood and wander through the village's network of houses built on wooden stilts.

While tourism is keeping the local economy afloat, climate change is threatening to sink it. But local climate experts are hoping new technology can help preserve the village's traditions for future generations.

In 2008, the village was completely submerged by a tropical cyclone, and the same thing happened 10 years later, forcing the evacuation of many local residents.

"During the worst typhoon, the water came all the way up to here," Kam Chan, Tai O resident, said from inside his house. "I moved my valuables up to this shelf, but even then they were soaked and I lost everything."

Residents, many of whose houses are on stilts, are worried the village may soon become uninhabitable. But despite the dangers, few want to leave.

"Evacuating the village might be the easiest solution for removing the problem completely, but that's not what the local residents want because Tai O is such a special place," Eddie Tse, from the Tai O Sustainable Development Education Workshop, said. "They see this as their ancestral homeland, and no one wants to leave their roots behind."

There have been some measures in place to protect the village, like a 200-meter-long sea wall built ten years ago to reduce flooding effects, but local residents worry it may take more in the longer term to prevent the impact of more extreme weather.

Researchers at Hong Kong's University of Science and Technology are trying to help by using high-tech software to predict typhoon activity.

"In recent decades as super computers develop, we can have smaller and smaller cells in the computer modeling, so you can have more details and more accuracy in the calculations," said Professor Xiaoming Shi, Assistant Professor Atmospheric Sciences at the Hong Kong University of Science and Technology.

"If there's a typhoon forming in the ocean, we can see which direction it's heading, whether it's going to Hong Kong or the northern part of China or Vietnam," Shi said.

Shi's colleague Professor Christine Loh is Hong Kong's former Under-Secretary for the Environment. She says the research taking place in the city has global significance.

"We have extreme conditions in Hong Kong – extreme high density of population, extremely tall buildings, squeezed on an extremely small piece of land," Loh said. "So any solution or insight that we have from Hong Kong could work elsewhere, so this is a great laboratory for dealing with these things. "

Local residents in Tai O are hoping that more global interest in its local battle with climate change will help drive innovations that can preserve not just its historic infrastructure but also the village's traditional way of life.