Hong Kong's Extradition Fight Ends, But Not The Demands For Democracy 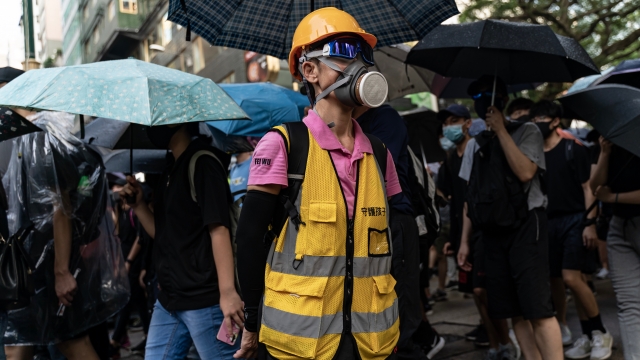 SMS
Hong Kong's Extradition Fight Ends, But Not The Demands For Democracy
By Peter Hecht
By Peter Hecht
October 24, 2019
Hong Kong killed the extradition bill that triggered months of street protests, but the issue has morphed into a sweeping pro-democracy cause.
SHOW TRANSCRIPT

The controversial extradition bill that triggered nearly seven months of street protests and upheaval in Hong Kong is dead. But what is the future of Hong Kong and mounting grievances that remain unresolved?

The Hong Kong demonstrations, drawing millions of people, grew to be characterized by their shouted mantra: "Five demands, not one less!"

Killing the extradition bill was just one of those five. The others call for major electoral reforms, including direct election of Hong Kong's leader — who is currently chosen by a committee of fewer than 1,200 members. But official resistance remains unbending.

The sweeping pro-democracy movement started over fears that Hong Kong residents could be arrested and shipped off to China for trial. The larger cause now consumes Hong Kong, perhaps with more seismic events to come.

The stakes are high and China is in no mood to back down as Hong Kong prepares — and its citizens resist — integrating the former British colony into the communist country in 2047. This fight is over preserving a promise of "one country, two systems." It's over state control vs. citizen governance.

Twenty-two years ago, Britain agreed to return this city of 7 million residents to China, following 156 years of colonial rule. The agreement came with promises that Hong Kong could function with semi-autonomous rule, including guarantees of free speech and unfettered capitalist markets.

That free speech remains defiantly on display as protesters also demand an inquiry into alleged police misconduct, a promise of amnesty for those arrested and an end to characterizations of the demonstrations as "riots." And there seems to be an unofficial sixth demand on their list: the removal of Hong Kong's chief executive, Carrie Lam.

The Chinese government dismissed a recent media report that Lam was due to be replaced by an interim executive as "a political rumor" based on "ulterior motives." The government appears to support Lam as she, in turn, embraces China's call for maintaining order.

But Lam says arrested protesters "have to take the consequences of breaking the law." And Bloomberg reports that the Hong Kong government is considering a new law that underscores the power struggle: It would make disrespecting the Chinese national anthem a crime, punishable by up to three years in prison.