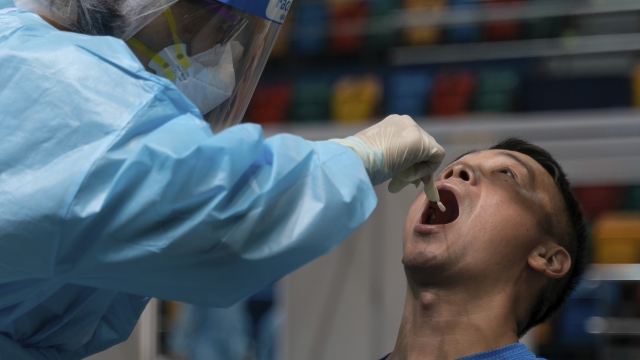 SMS
Hong Kong Ramps Up Coronavirus Testing Amid Some Skepticism
By Adam Elrashidi
By Adam Elrashidi
September 1, 2020
Hong Kong is mass testing residents for the coronavirus, but some people say they're skeptical about how their private data could be used by China.
SHOW TRANSCRIPT

Hong Kong is ramping up its coronavirus testing efforts. The semiautonomous city has opened over 100 testing centers as part of a mass testing initiative.

More than 500,000 residents signed up for the program and Hong Kong officials say tens of thousands of people, including many government ministers, have been tested already. The government expects 5 million people to participate in the weeklong program, although it could be extended based on demand.

Still, some residents remain skeptical. Critics of the program are worried their data will be collected by the Chinese government. Pro-democracy activists have also called for a boycott, citing Swedish media reports that the test kits are faulty.

Hong Kong Leader Carrie Lam has dismissed those concerns and urged residents to view testing in a fair and objective light. She accused critics of trying to undermine the relationship between Hong Kong and Beijing. Lam also said the test kits had passed quality assurance procedures.

Hong Kong has witnessed a resurgence of the virus in recent weeks, but it's now slowing down. Officials attributed the spike in infections to government exemptions for certain workers coming from mainland China. They hope the mass testing will help detect asymptomatic carriers to further contain the spread of the virus.