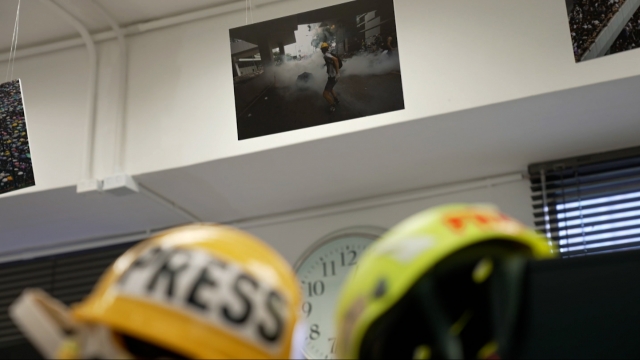 SMS
Hong Kong Journalists Vow Fight As Press Freedoms Under Attack
April 25, 2021
Since a journalist was convicted over her coverage of anti-democracy protests in Hong Kong, other journalists have been targeted.
SHOW TRANSCRIPT

A Hong Kong court has convicted an award-winning journalist over her investigation into the police’s handling of an event during the 2019 pro-democracy protests. But the verdict is about more than just one reporter doing her job to uncover possible government wrongdoing. It may set the tone for what freedom of the press is left in Hong Kong: the press literally under attack.

A Hong Kong newspaper linked to a spiritual group banned in China shared this security cam footage of masked men smashing its printing presses. The attack, coming at a time of tightening Chinese control, was condemned by the city’s foreign correspondents club and the Hong Kong Journalists Association.

Chris Yeung, Chair, Hong Kong Journalists Association: "Journalists are under direct physical threat and that will cause damaging impact on them..feelings of more fears and feelings of terror among journalists in doing their work."

Hong Kong is a major media hub with a vibrant local press and a number of multinational outlets based here, but press freedom has been in steady decline. According to the latest Reporters Without Borders’ “World Press Freedom Index,” Hong Kong has fallen from 18th in 2002 to 80.

Pressure of the media intensified in the wake of 2019 pro-democracy protests thanks to a new national security law that has curbed dissent and paved the way for patriots to run the city. When Hong Kong’s top leader Carrie Lam unveiled the law on July 1, she promised that the city would continue to enjoy the freedom of speech, freedom of press, of publication, protest, assembly and so on. But what followed were a number of moves against the press.

They included the police raid of pro-democracy newspaper "Apple Daily," the arrest of the paper’s owner Jimmy Lai, the replacement of the head of public broadcaster R.T.H.K., the cancellation of politically sensitive shows and the prosecution of a journalist who accessed a public database to investigate police brutality. The security law has also driven many to self censorship

Grace Leung Lai-Kuen, Lecturer & Media Commentator School of Journalism and Communication at Chinese University of Hong Kong: “We don't know whether people in the next table can overhear what we are talking about and they may ring a phone to the police department because they got a hotline.”

Despite the pressure, reporters continue to report. "The Apple Daily," the city’s largest opposition newspaper, is still in print. Independent online reporters and media organizations like "Citizen News" also continue to serve a growing audience