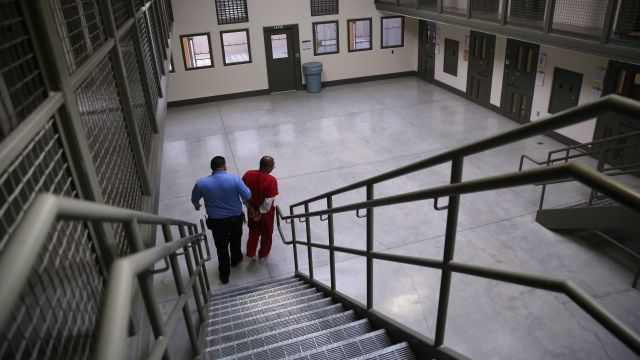 On Thursday, an advisory council subcommittee told the Department of Homeland Security it should continue to use for-profit prisons to detain people accused of immigration violations.

But just hours later, after an unusual debate, the advisory council rejected the recommendation. Here's why.

Earlier this year, Secretary of Homeland Security Jeh Johnson asked the advisory council to create a subcommittee to investigate Immigration and Customs Enforcement's use of private prisons to determine if the practice should be stopped.

In its report, the subcommittee voiced concerns about ICE's ability to oversee these private facilities. It also noted criticism from human rights groups of inhumane conditions, abuse and safety issues.

The subcommittee ultimately concluded that DHS had no choice but to continue using privately run detention centers, citing DHS' budget as a main concern.

It claimed eliminating the private prisons would cost too much and make it more difficult for ICE officers to deal with surges in the detainee population.

But when the advisory council received a draft of the report, more than two-thirds of its members disagreed with that conclusion.

Instead, they adopted the dissenting opinion on the subject — rejecting the idea that ICE's use of private prisons was necessary.

That opinion, written by Homeland Security Advisory Council member Marshall Fitz, read, in part, "Any shift away from such reliance would take years, carry significant costs, and require congressional partnership ... but I disagree that these obstacles require our deference to the status quo."

It's unclear exactly what will happen once Johnson sees the final version of the report.

But the subcommittee's decision reflects a similar one from the Department of Justice. DOJ announced in August that it would phase out the use of private prisons, citing safety concerns.