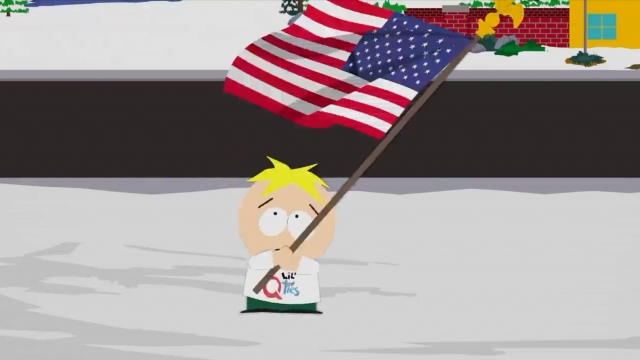 From Saturday Night Live to HBO to South Park, major players in entertainment are starting to depict QAnon. But experts are cautious. As the absurdity of the conspiracy theory becomes the butt of jokes, does it ignore the group's roots in anti-Semitic and racist ideology?

“QAnon says there is an underground ring of very bad people who gather to undermine Trump and steal elections and eat children. I hear that and I'm like whoa, where," said Kate McKinnon on a recent episode of Saturday Night Live.

"On the one hand, the scene is very purposefully trying to make it laughable and ridiculous and unserious in a way that it helps us to recognize that it's not going to be congruent theory that there are lots of weaknesses in the theory," said Outi Hakola, Researcher of North American Culture at the University of Helsinki.

"That version of demonization, literally by using a witch, in SNL to sort of represent it, was the thing that kind of allows people to to not look at other stuff," said Jack Bratich, Associate Professor of Journalism and Media Studies at Rutgers University, and author of “Conspiracy Panics: Political Rationality and Popular Culture.

"There is a risk there of at least giving the impression they're not as dangerous as they actually are," said Kurt Braddock, Assistant Professor of Public Communication at American University.

These widely seen depictions also run the risk of galvanizing QAnon followers. In response to the Witch SNL skit, one apparent QAnon believer noted that “It's almost as if QAnon is right....and that's why the media and now SNL are trying to mock millions of those who have done the research.”

"At Papa Johns, we know you want real ingredients, no additives, no preservatives, and no child sex trafficking in the basement. Stop by with your Q-Pon today."

In one major online QAnon forum, members praised the skit, with one commenter saying: I think they're attempting to make fun of us because what we believe is "so outlandish" but it's only going to drive more people to look into this. I love seeing this stuff go mainstream!

"I just wanted to believe in something that would get me out of the house!"

Comedy Central's "South Park" has a history of crudely lampooning terrorist organizations like Al Qaeda and religions like Scientology. And on March 10, it unveiled its first take on QAnon.

"A lot of people are trying to figure out: What's the joke here? How do we make it funny? When it seems like a lot of people were, let's face it, beating police officers to death, wearing 'Q' paraphernalia trying to get into the Capitol and getting into the Capitol," said Brian Cogan, author of "Deconstructing South Park: Critical Examinations of Animated Transgression."

The episode mocked QAnon supporters, but many major QAnon influencers saw the episode as getting their message out. One with 52,000 subscribers on Telegram noted "More the media talks about Q, the greater the Overton window enlarges.” Still, others saw this as downplaying QAnon. One Telegram user said, "It just ripped on Q followers and promoted the vaccine. Not exactly a red pill.”

"I hope that the episode is so sort of devastating to that, that they just go — at least some will go — 'Oh, my God. Why am I doing this?'" Cogan said.