The Historic Inter-Korean Summit Was Loaded With Symbolism 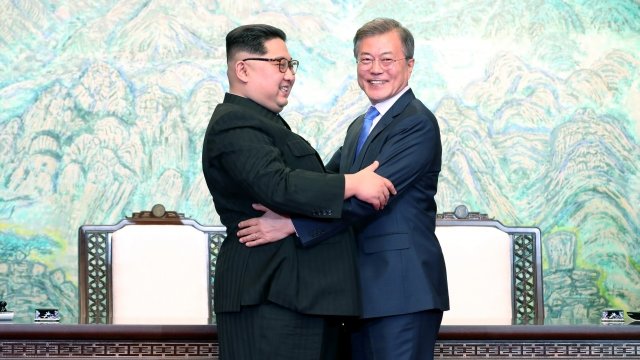 From the location to the furniture to the dinner menu, the details surrounding the inter-Korean summit were flush with meaning and history.

From the location to the furniture to the dinner menu, the details surrounding the historic meeting between North and South Korea were loaded with symbolism.

North Korean leader Kim Jong-un and South Korean President Moon Jae-in met in the truce village of Panmunjom, which is inside the demilitarized zone that separates the two countries.

Panmunjom has become a symbol of the decadeslong conflict between the two Koreas.

South Korea's government said the conference room Kim and Moon met in was carefully designed to "embody the theme of 'Welcoming, Consideration, Peace and Hope.'"

The oval-shaped table they sat at was made to look like two bridges merging. The chairs were decorated with an outline of the Korean Peninsula. And Kim and Moon were seated exactly 2,018 millimeters apart to represent the year the meeting took place.

During the talks, the two leaders planted a pine tree that dates back to 1953 — the year the Korean War Armistice Agreement was signed. They used soil and water from both countries to symbolize their wish for peace and prosperity.

Even the food served during the summit was heavy with meaning. The menu included dishes to remind both Kim and Moon of their childhoods.

And it appears that careful attention to detail paid off. Kim and Moon ultimately pledged to end the war between their two nations and "completely cease all hostile acts against each other."