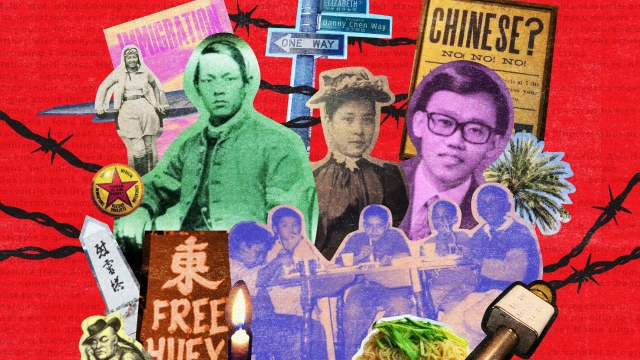 What you're hearing there is "Making The Banned" from hip-hop artists Jason Chu, Alan Z and Humble the Poet. It's part of a new album "Face Value" that tackles Asian American history and spotlights the Asian hip-hop community.

Rapper Alan Z: "Listening to this album is kind of like the reminder that we’re all in this together and we’re coming together as a united front."

Hip-hop has always been a genre about “empowerment and liberation” for marginalized people, and it's long-inspired countless Asian American artists.

Rukus Avenue CEO Sammy Chand: "Groups like Public Enemy, NWA — all these people that were defining and that had something to say about the society around us."

Audio engineer David Yungin Kim: "It hit an emotion. I think I was an angry kid. I was confused. I was angry at the world."

Chand: "I think that is something that really identified with all of us immigrants, of course, right?"

In 1979, Afro Filipino disco artist Joe Bataan debuted "Rap-o-Clap-o" — now considered to be one of the earliest rap songs ever recorded and built off the cultural influences of New York City's hip-hop community and pioneers like DJ Kool Herc, Afrika Bambaataa and Grandmaster Flash.

From the seventies and eighties onward, hip-hop grew with the success of artists like NWA, Run DMC and Public Enemy, inspiring a major wave of Asian American rappers, break dancers and producers entering the scene in the nineties. And artists like The Mountain Brothers, RhythmX and the rap duo of Key-Kool and DJ Rhettmatic contributed to the growing hip-hop culture.

Rapper Jason Chu: "A lot of people go 'yo, why is there such a deep tie between Asian American communities and this Black and Brown art form.' And I think because so much of Asian American culture as we've been wrestling with identity for about 50 years, parallels the birth of hip-hop culture as it grew and it had its growing pains."

Rapper Jason Chu, an expert on the intersection of Asian American identity and hip-hop culture, says that the two communities developed at the same time — building from the shared histories of racism and identity in the U.S.

Chu: "I think there's been such a parallel to where now, you have a ton of young, 15- to 25-year-old Asian Americans who literally grew up with hip-hop as the dominant voice of not just marginalized cultures, but of pop culture in their lifetime."

Kim: "You got groups like 88rising here … Far East Movement and Drunken Tiger from Korea, who I grew up listening to. That was the first person, first Korean that I related to, because it was a player in the hip-hop industry that looked like me."

Today, the representation of Asian American artists is still growing in hip-hop, with labels like Rukus Avenue pioneering South Asian hip-hop both in the U.S. and internationally.

Chand: "We really had a lot to do with how young South Asians in this country also viewing themselves as potentially being artists. … Not only was hip-hop conducive for us, but I think that that story itself was very unique to us. And I think that we needed the hip-hop forum for it.”