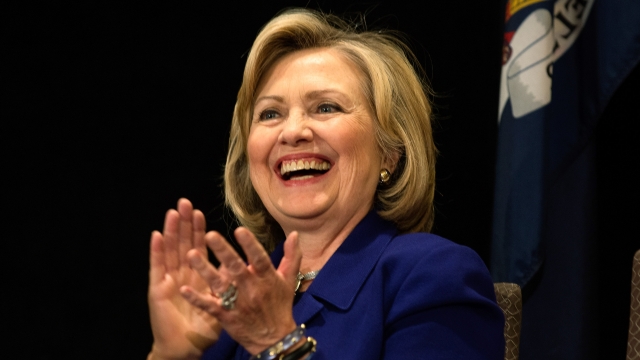 SMS
Hillary Clinton Is The Winner Of The Big Debate That Never Happened
By Eugene Daniels
By Eugene Daniels
May 27, 2016
Sanders and Trump have spent months going after Clinton. A debate would've been the perfect chance for them to attack her uncontested.
SHOW TRANSCRIPT

One candidate was doing a little bit of celebrating this Friday when a strange debate matchup fizzled before it went too far. Let's start at the beginning.

Presumptive GOP nominee Donald Trump was on "Jimmy Kimmel Live" when he got a little note from Bernie Sanders.

"Are you prepared to debate the major issue facing our largest state and the country before the California primary? Yes or No? He wants to know if you will debate him," Kimmel said.

The Sanders campaign even said they were in talks to iron out the details Thursday.

As you can imagine, a Trump-Sanders matchup sent the internet, the media and TV networks into a tailspin — at least for about a day, until Trump backed out.

On Friday, he released a statement backpedaling, saying, "Now that I am the presumptive Republican nominee, it seems inappropriate that I would debate the second place finisher." Trump has a point; that debate would've been completely unprecedented and likely ticked off most Democrats.

Trump's absence likely has Hillary Clinton celebrating and, well, doing whatever this is. Because the loser of a Trump-Sanders debate would have been Clinton no matter what.

Both men have spent months going after Clinton; a debate would have been the perfect opportunity for them to attack her uncontested. That would have given Trump a lot of ammunition in what's likely to be a heated general contest between him and Clinton.

And had the debate gone well for Sanders, it'd help the case he's currently making: that he should be the Democratic nominee because he does better against Trump than Clinton does. And both men could've used Clinton's absence to hit her on anything from being ill-prepared to being scared to debate them.

Alas, it seems what would have been the debate of the century is no more. At least for now.