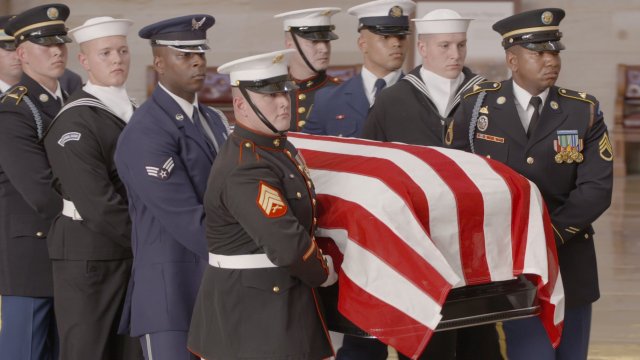 Members of Congress gathered for an emotional memorial service to honor the late congressman Elijah Cummings, who served in Congress for 23 years.

Cummings died last week from health complications. He was 68 years old. The public paid their respects to the late oversight committee chairman, who lay in state in Statuary Hall Thursday following a ceremony with his colleagues. He's the first African American ever to do so.

Cummings was eulogized by Democrats and Republicans alike, something his political rival congressman Mark Meadows was quick to point out.

"Our country would be better with a few more unexpected friendships. I know I was deeply blessed. God bless you," he said.

"He was such a gentleman that sometimes we felt he needed protectors because he was so willing to bend and support members on both sides of the aisle. Members that you would think were his archenemies were really broken at the thought of not having him there. He was a giant and he was a prophet on the Hill for so many of us," said Democratic congresswoman Stacey Plaskett.

Plaskett, who sat just in front of the chairman on the House oversight committee, says Cummings always counseled members to be steady, to be calm and to be kind.

The late congressman's funeral will be Friday in Baltimore at the church he attended for nearly 40 years. He'll be eulogized by a list of speakers including Hillary Clinton, House Speaker Nancy Pelosi and former Presidents Bill Clinton and Barack Obama.