Hill And Holmes Testify, Rounding Out The Week's Impeachment Hearings 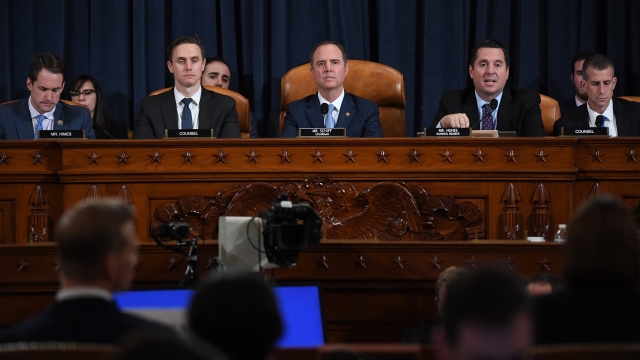 SMS
Hill And Holmes Testify, Rounding Out The Week's Impeachment Hearings
By Alexandra Miller
By Alexandra Miller
November 21, 2019
There are no depositions scheduled next week, and it's not yet clear if Democrats will call more witnesses or end this part of the inquiry.
SHOW TRANSCRIPT

The first phase of public impeachment hearings is over. Two officials, the last of nine this week, testified Thursday morning in the House's ongoing impeachment investigation of President Trump.

Fiona Hill, the White House's former top expert on Russia, railed against Republican lawmakers who say Ukraine may have meddled in the 2016 election in favor of Democrats.

"This is a fictional narrative that has been perpetrated and propagated by the Russian security services themselves. The unfortunate truth is that Russia was the foreign power that systematically attacked our democratic institutions in 2016. This is the public conclusion of our intelligence agencies, confirmed in bipartisan congressional reports. It is beyond dispute, even if some of the underlying details must remain classified," Hill said.

The other witness, David Holmes, only came into public view within the last 10 days. Acting Ambassador to Ukraine Bill Taylor testified last week that Holmes brought a new conversation to his attention — one where he says EU Ambassador Gordon Sondland and the president discussed investigations over the phone while Sondland was at a restaurant in Ukraine. Holmes says he could hear the whole thing.

But new Thursday: Holmes says Taylor and others knew about this conversation since August, making it unclear why Taylor testified the call was previously unknown to him.

Holmes: "After returning to the embassy, I told Ambassador Taylor about the July 26 call. I also repeatedly referred to the call and conversation with Ambassador Sondland in meetings and conversations where the issue of the president's interest in Ukraine was potentially relevant."

Republicans questioned the timing of Holmes coming forward, to which he said he told his boss, but says it was clear "everyone knew" the president was asking for investigations into the Bidens.

Both also strongly defended their colleague, former Ambassador to Ukraine Marie Yovanovitch, saying they were confused as to why she was being maligned in a  smear campaign when the president could simply replace her quietly.

Heading into Thanksgiving week, Democrats have no more impeachment-related hearings or depositions scheduled.

They'll now have to decide whether to bring in more witnesses, either behind closed doors or in public, or whether to close this part of the impeachment process and write a report for the Judiciary Committee.

The committee will then decide whether to draft articles of impeachment.

Hill reflected on her part in the inquiry as a fact witness and spoke about the importance of unifying the country.

She said: "As Americans, we need to be together again in 2020 so the American people can make a choice about the future. And ... make their votes in a presidential election without any fear that this is being interfered in ... from any quarter whatsoever."