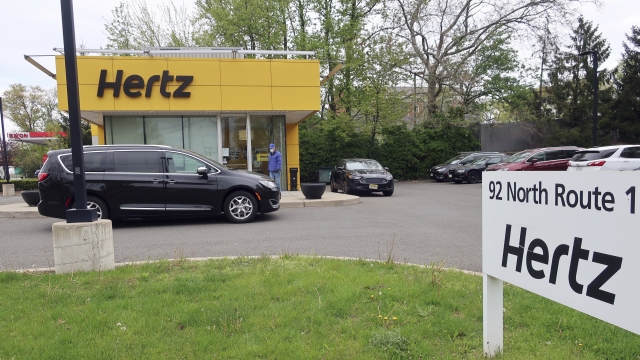 The nation's largest rental car chain is involved in a class action lawsuit for filing police reports on what attorneys say are actively paying customers with rental car contracts, like Cristel Hibbs, who says she was home in new jersey with her daughter, when the police arrived.

"Having this happen has destroyed me," Hibbs said.

Her story starts during the COVID lockdowns. Her new position as a massage therapist required her to have a car.

"I ended up renting a car from Hertz," Hibbs continued. "I didn't anticipate having to rent it as long as I did."

Hibbs says COVID lockdowns were getting severe at the time she intended to return her rental.

Hibbs says she couldn't make the hour and half drive to return the car to Philadelphia. But says she kept the company in the loop and kept paying.

"I was in touch with Hertz and letting them know, obviously with the COVID situation, you know, I'm going to have to extend my rental," she said. "In the meantime, payment is coming out of my bank account."

"I was getting threats by email saying that they were going to come, and they were going to report a theft," she said. "And I was like, 'Well, this is dumb. Like, that's crazy. I'm in communications. I'm paying. You're receiving the money. So, why is it you're going to do this?'"

In April, Hibbs says her world came crashing down.

"I was on a Zoom call and police officers surrounded my house, were knocking on my door or down the street and were casing the joint," she said. "I step down the stairs, they're like 'Turn around.' And I was like, 'What's going on?' They're like, 'You're under arrest for possession of a stolen vehicle.'"

Her then 15-year-old daughter was in the house.

"A male police officer walked into my house. He got my daughter to give me some shoes and she put them on my feet while I was handcuffed," Hibbs continued. "She had some breakdowns while I was gone. So, I wasn't even with her. And she's never had anything like that... I'm not a criminal. I've done nothing wrong."

Pre-COVID, 44.5 million cars were rented around the U.S.

A year later, due to COVID, that number dropped to 17 million.

Before the pandemic, Hertz had one of the biggest fleets. Autorentalnews.com says the company owned over 650,000 cars.

But, like many companies in the pandemic, they were forced to sell almost 200,000 of them off when the demand was low.

And in 2020 the company filed bankruptcy.

Attorney Francis Malofiy is representing Hibbs and hundreds of other people suing Hertz.

"I think that you're dealing with an evil corporation that filed false police reports against its very own customers," he said. "They tried to hide it for years."

Hertz released a statement saying in part: "...The vast majority of the current legal claims involve renters who were many weeks or even months overdue returning vehicles and who stopped communicating with us well beyond the scheduled due date."

"Hertz using the police and the prosecutors and the police as a taxpayer funded repo service is an abuse of public funds," Malofiy continued.

That's little comfort to Hibbs, who says her life was left in ruins after the arrest.

"I did everything that I could," she said. "I contacted them. I kept them in the loop. You know, they were paid, and it didn't matter. It didn't matter. They didn't care."