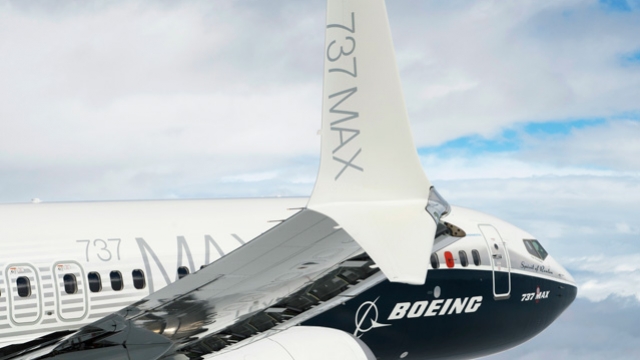 SMS
What's Boeing Doing To Solve Its 737 MAX Problem?
By James Packard
By James Packard
March 14, 2019
Before Boeing's prized 737 MAX can start carrying passengers again, engineers will have to update one of the plane's automation systems.
SHOW TRANSCRIPT

Boeing's fix to its global 737 MAX groundings rests in two sensors. If Boeing can make them more reliable, they'll placate a lot of concern about potential nosedives.

The worry lies in something called the Maneuvering Characteristics Augmentation System, or MCAS for short.

It's invisible to pilots.

The MCAS is supposed to help avoid a stall: when the plane is going so slow or is pitched up so high that airflow over the wings all but stops. The plane loses lift and starts to fall. If the MCAS thinks the plane is stalling, it forces the nose down.

But how does the MCAS know the plane is stalling? It uses readings from "angle of attack" sensors. There are two AOA sensors on the nose of the 737 MAX. They measure air pressure to determine the plane's pitch.

Angle of attack is literally the angle at which a plane is pitched. If just one of those AOA sensors reads the plane as stalling, the MCAS will react and push the nose down. It does that by moving the plane's "horizontal stabilizer" — what looks like little wings on the tail of the plane. They control pitch.

But if one of the angle of attack sensors is wrong, the MCAS will put the nose down anyway — as in, a nosedive.

Another problem: The MCAS can move the horizontal stabilizer in the opposite direction of the pilot's attempted corrections.

So to make the plane safer, Boeing is going to improve how the MCAS reads data from AOA sensors. Plus, it'll put limits on how much the MCAS can move the horizontal stabilizer. That, the company says, will ensure the pilot has more control over the plane's pitch, even when the MCAS kicks in.

Boeing says it worked with the FAA in developing the updates. The company said before the groundings that it expected to have the fixes rolled out by April. With its planes on the ground until further notice, it's likely Boeing engineers feel the heat to get a solution out ASAP. It'll have to be enough to make the governments and airlines that grounded the plane confident it's safe.