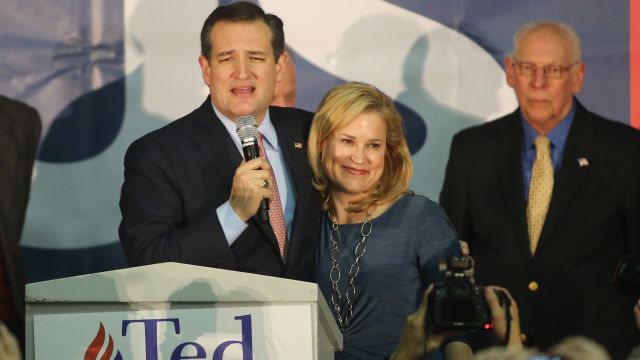 All is fair in love and war but maybe not in politics. The GOP's top candidates are at odds again over attacks on their potential first ladies.

Among Donald Trump’s various tweets Tuesday promising to crack down on terrorism in the wake of the Brussels bombings, the GOP front-runner tweeted this: "Lyin' Ted Cruz just used a picture of Melania from a GQ shoot in his ad. Be careful, Lyin' Ted, or I will spill the beans on your wife!"

That GQ photo he’s referencing is from a photo shoot she did with the British men’s magazine in 2000. We won’t show you the picture in question, but the nude supermodel was posing with some fur on a jet.

Ted Cruz tweeted: "Pic of your wife not from us. Donald, if you try to attack Heidi, you’re more of a coward than I thought. #classless."

Cruz is right: That ad actually came from an anti-Trump super PAC called Make America Awesome, which isn't affiliated with any candidate.

As for what "beans" Trump might have on Heidi?

"Mrs. Cruz, what was Donald Trump talking about?" a reporter asked.

"You know as I said, you probably know by now that most of the things Donald Trump says have no basis in reality, so we are not worried in the least, we are focusing on our campaign, and we are going to continue to do that," Heidi responded.

The Twitter spat came the same day voters in Arizona chose Trump as the GOP candidate, and voters in Utah chose Cruz.

"It reveals a lot about character, a lot about class that Donald’s instinct is to try to attack my wife and sully her and you know that should be beneath Donald, but you know, Chris, the reason he’s doing that is because he had a very bad night last night, he got clobbered in Utah," Cruz told CNN’s Chris Cuomo Wednesday.

Cruz did take home 40 delegates in Utah Tuesday, but Trump still won the night with Arizona's 58 delegates. By CNN's count, the business mogul has a total of 741 delegates compared to Cruz’s 461.