Trump White House Taking On Health Care Ahead of 2020 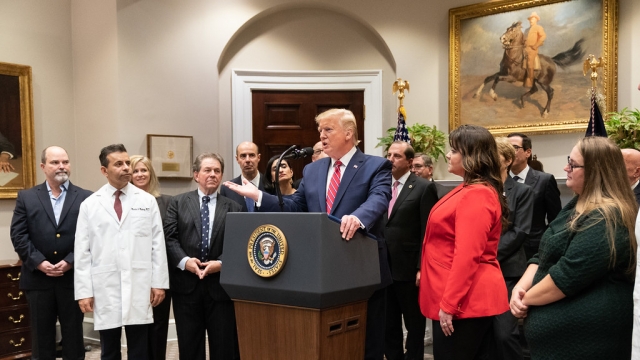 SMS
Trump White House Taking On Health Care Ahead of 2020
By Amber Strong
By Amber Strong
November 25, 2019
Health care is still a top-tier issue for voters ahead of 2020 as the Trump administration rolls out several new rules on hospital bill transparency.
SHOW TRANSCRIPT

The White House is looking to tackle health care ahead of 2020, starting with price transparency.

“Our goal was to give patients the knowledge they need about the real price of health care services.”

It works through a pair of new rules. The first is a proposal requiring insurers to provide consumers with online access to an estimate of what he or she would owe for a covered service. Basically, an explanation of benefits up front.

The second rule gives hospitals until 2021 to begin posting their negotiated rates for services as well as their lowest cash prices, in “plain language” that’s easy to understand.

“What happens now is that insurers and providers, doctors and hospitals negotiate prices and the prices are mostly kept secret. The only way we as consumers find out about health care prices is when we actually go to the hospital or go to the doctor and see those bills that come with explanations of benefits.”

But now that the prices will be open for all to see, that means rates will go down, right? Maybe, maybe not.

Consumers may not see the changes at all, several hospitals are threatening lawsuits claiming the rules violate their First Amendment Rights.

"Now it's the president saying, okay, the hospitals have to tell us how much they're charging. We already know they're charging an arm and a leg. I guess it's better that they tell us but the real reform has to be that we have a single payer system like Medicare that can drive down those costs. They can tell those hospitals No, you can't charge this. We're not going to pay it."

“We don’t have to tear down the system but we do have to do what the American people want.”

"The fact is that right now, the vast majority of Democrats do not support Medicare for all."

It’s no wonder Congress and the candidates are divided on health care, so are Americans. According to a new poll from the Kaiser Family Foundation 53 percent of those surveyed favor a Medicare for all system, 43 percent oppose it.

But movement on health care could prove pivotal for the President. The administration’s earlier attempt at forcing drug makers to disclose their prices in advertisements is still caught up in the courts.

And while Trump has dismantled key parts of the Affordable Care Act --he’s been unable to overturn the law entirely.

GOP Senator Mike Braun applauds the White House's new regulations but says Republicans must lead the health care conversation or be outflanked by Democrats in 2020.

“We were not recognizing health care as an issue. We were apologists for a broken industry. So we really do need to be attentive but republicans and conservatives, are foot-draggers, don't want change and a lot of times just get outmaneuvered.”