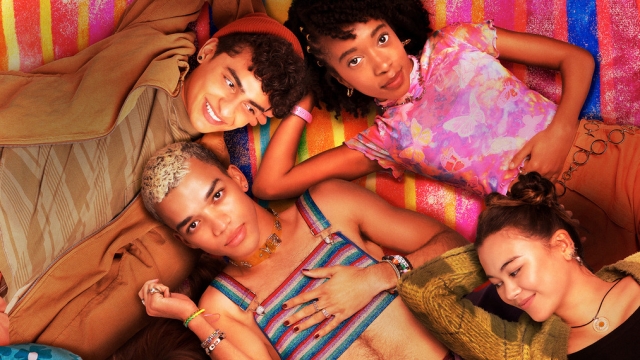 "Generation" is one of HBO Max's newest additions to its slate of Gen Z teen dramas. The series centers the perspectives of mostly queer teens exploring their sexuality, friendships and relationships through the modern world of social media and social justice.

Actress Lukita Maxwell: "It was very apparent from the first script read in the pilot, that it was going to be depicted in a very new kind of revolutionary way in terms of young, queer POV. And I was just very excited to be a part of it."

Created by 19-year-old Zelda Barnz and her father, "Generation" is like the lighter, funnier sibling of HBO's Emmy award-winning teen drama "Euphoria." Both find seriousness in stories of adolescence, but "Generation" is a little less gritty and a lot more grounded in its storytelling — aiming to represent the real experiences of LGBTQ teens today.

Maxwell: "I sobbed when I watched [episode] five for the first time. ... I had never seen a scene where two young femmes are in a room, like, freaking out because they don't know what their sexualities are. One of them, like, doesn't really care about what her sexuality is. … And it completely resonated with my high school experiences."

"Generation" takes a snapshot of Gen Z — which is more racially and ethnically diverse than past generations, and according to a recent Gallup survey, one of the most LGBTQ-inclusive.

One in six Gen Z respondents said they are queer or transgender, and Gallup editor Jeffrey Jones told Newsy that this younger generation aged 18 to 24 "doesn’t have the same stigma against being LGBT that past generations grew up with." Gen Z is also more likely to question binary gender and sexual orientation constructs.

Because of Gen Z's inherent inclusiveness, the storylines of LGBTQ characters on screen have moved past the typical coming out stories and moved towards more nuanced discussions about the challenges of living with conservative parents, building a group of supportive friends and allies, and defining queer relationships.

Between "Generation" and "Euphoria," as well as the skateboarding-focused "Betty" and soon-to-be-released "Gossip Girl" reboot, HBO Max is building a home for stories of queer teens.

Maxwell: "I'm really excited to see more trans representation. I think that if we're going to get a season two, hopefully, that the writers were definitely thinking about that and wanting to explore that and have some more trans characters in high school, because that representation is so incredibly important."