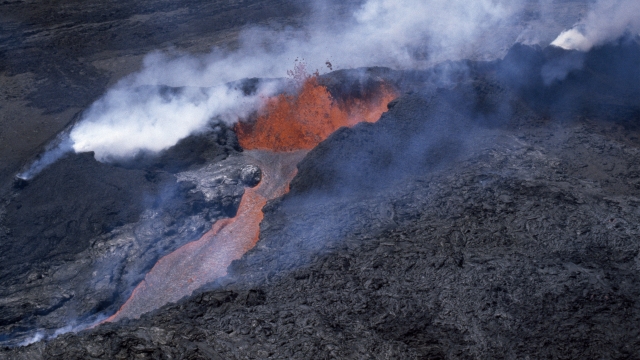 Scientists say the eruption of the Mauna Loa on Hawaii's big island isn't imminent, but they are on alert because of a recent spike in earthquakes.

Hawaii officials are warning residents of the Big Island that the world’s largest active volcano, Mauna Loa, is sending signals that it may erupt.

Scientists say an eruption isn’t imminent, but they are on alert because of a recent spike in earthquakes at the volcano’s summit. Experts say it would take just a few hours for lava to reach homes closest to vents on the volcano, which last erupted in 1984.

Hawaii’s civil defense agency is holding meetings across the island to educate residents about how to prepare for a possible emergency. They recommend having a ″go″ bag with food, identifying a place to stay once they leave home and making a plan for reuniting with family members.

“Not to panic everybody, but they have to be aware of that you live on the slopes of Mauna Loa. There’s a potential for some kind of lava disaster,” said Talmadge Magno, the administrator for Hawaii County Civil Defense.

The volcano makes up 51% of the Hawaii Island landmass, so a large portion of the island has the potential to be affected by an eruption, Magno said.

There’s been a surge of development on the Big Island in recent decades — its population has more than doubled to 200,000 today from 92,000 in 1980 — and many newer residents weren’t around when Mauna Loa last erupted 38 years ago. All the more reason why Magno said officials are spreading the word about the science of the volcano and urging people to be prepared.

Mauna Loa, rising 13,679 feet above sea level, is the much larger neighbor to Kilauea volcano, which erupted in a residential neighborhood and destroyed 700 homes in 2018. Some of its slopes are much steeper than Kilauea’s so when it erupts, its lava can flow much faster.

During a 1950 eruption, the mountain’s lava traveled 15 miles to the ocean in less than three hours.

The Hawaiian Volcano Observatory, which is part of the U.S. Geological Survey, said Mauna Loa has been in a state of “heightened unrest” since the middle of last month when the number of summit earthquakes jumped from 10 to 20 per day to 40 to 50 per day.

Scientists believe more earthquakes are occurring because more magma is flowing into Mauna Loa's summit reservoir system from the hot spot under the earth's surface that feeds molten rock to Hawaii's volcanoes.

The temblors have declined in frequency in recent days but could rise again.

Why Some Volcanic Eruptions Don't Have Bigger Climate Impacts

Hunga Tonga-Hunga Ha'apai volcano could have ejected more planet-cooling ash when it recently erupted. Scientists aren't sure why it didn't.

Bob Werner, an Ocean View resident who didn’t attend the meeting, said it’s wise to be aware of a possible eruption but not to fear it. He’s not concerned that the neighborhood would be completely cut off, if lava flows across the only road connecting it to the bigger towns of Kailua-Kona and Hilo, where many people do their shopping.

The “greater concern is it will be extremely annoying to drive an extra hour or two hours to get the same stuff,” he said.

Ryan Williams, the owner of the Margarita Village bar in Hilo, said the volcanic unrest wasn’t worrying customers who are used to warnings.

There could still be a heightened sense of urgency since officials have been holding town hall meetings, urging people to prepare.

“But everything I’ve read or heard, they trying to kind of assure people that conditions have not changed,” Williams said. “There’s no imminent eruption, but just to be alert.”

Magno said his agency is talking to residents now because communities closest to vents likely wouldn’t have enough time to learn how to respond and prepare once the observatory raises its alert level to “watch,” which means an eruption is imminent.

The current alert level is “advisory” meaning the volcano is showing signs of unrest yet there’s no indication an eruption is likely or certain.

Residents in other parts of the island would have more time to react.

Lava from Mauna Loa’s northeast flank could take days or weeks to reach residential communities. That’s because the mountain’s slopes on that side are relatively gentle and because towns are farther from volcanic vents.

Frank Trusdell, research geologist at the Hawaiian Volcano Observatory, said all of Mauna Loa’s eruptions in recorded history have started in its summit crater. About half of them stayed there, while the other half later spewed lava from vents lower down the mountain.

Mauna Loa has erupted 33 times since 1843. It last erupted in 1984 when lava flowed down its eastern flank only to stop 4.5 miles short of Hilo, the Big Island’s most populous town.

Mauna Loa also has a history of disgorging huge volumes of lava.

The earthquakes could continue for a while before any eruption: increased seismic activity lasted for a year before a 1975 eruption and a year-and-a-half before the 1984 one. Alternatively, the temblors could subside and Mauna Loa may not erupt this time.

Trusdell said residents should look at his agency’s maps and learn how quickly lava may show up in their neighborhood. He also urged people living in one of the short-notice areas to pay attention if the summit turns red.

“All you got to do is look up there and see the glow. You grab your stuff, throw it in the car and drive. Go!” he said.

They can always go home after if the lava ultimately doesn’t flow into their neighborhood, he said.