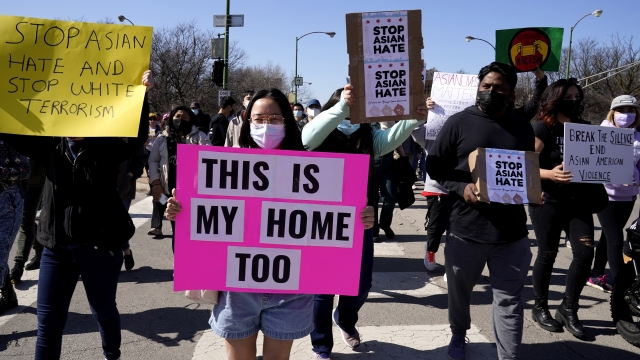 A new FBI report shows what many Asian American activists, community organizers and leaders already know: Hate crimes against Asian American and Pacific Islanders are up.

DAVID L KIM: These numbers are completely underreported, and I think that this is a start.

KIM: Reporting without retribution, without fear, that is only this way that we can start to get more of an accurate count.

While the FBI numbers are based on police reports, anonymous reporting like this can help create policies or legislative changes. Stop AAPI Hate has been tracking national incidents since the start of the pandemic, and its data has been used to help pass legislation like the COVID-19 Hate Crimes Act.

RUSSELL JEUNG: Sadly, what we've seen in 2021 with the attacks on the elderly, with the shootings in Atlanta and Indianapolis, they weren't actually anomalies, but actually part of that national trend of hate against Asian Americans. The good news, though, in 2021, is we've really seen the Asian American community and the Pacific Islander community stand up and resist.

He says that overall, AAPIs underreport.

JEUNG: Asian Americans tend to underreported because of language barriers, because they don't think anything is going to be done with the report because, you know, they come from countries where they're afraid of the government.

But getting accurate numbers is just one part. Kim says it's important to address the after effects, particularly when it comes to the elderly.

KIM: It leads to an increase in isolationism because they're simply afraid of leaving their home. They are traumatized … we still need to address, you know, those who have been affected and start helping them recover.

Also important is addressing racism, right at the start.

JEUNG: So we're really advocating for ethnic studies to prevent racism, to have students of all groups learn about each other and develop greater racial empathy. We want to promote more civil rights protections.