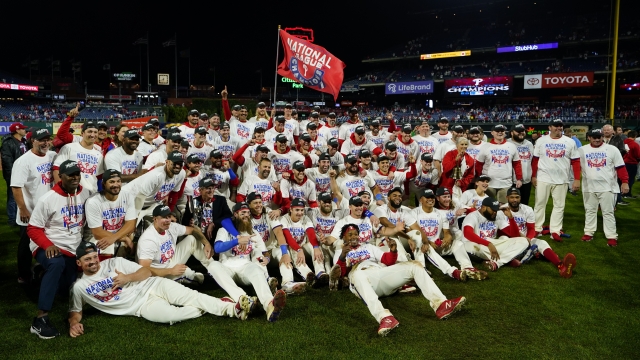 The wild-card Phillies were the last club into the 12-team playoff field this year after finishing third in the NL East.

Bryce Harper broke up the Phillies postseason party on the mound and directed his team to where the true revelry was about to begin for the National League champs.

With that, Harper in his backward cap walked toward the dugout and raised his arms in jubilation to the soundtrack of Phillies fans screaming "MV3! MV3!" The Phillies soon scrambled inside for the boozy bash that awaited in the clubhouse.

Harper made the scene possible because he rose to the moment Philly demanded of him from the time he signed the richest free-agent deal in baseball history. Harper has made the monumental feat of hitting a baseball look so easy in the postseason and with the NL pennant at stake, he delivered with easily the defining moment of his four-year Philadelphia career.

Harper slugged his fifth homer of the postseason, a two-run blast in the eighth inning that turned Citizens Bank Park into a madhouse, and the $330 million slugger powered the Phillies past the San Diego Padres 4-3 on Sunday and into the World Series for the first time since 2009.

The organ is a common sound you hear at baseball games, but why and what is the significance of it?

One swing. One opposite-field shot. One game-winning home run that about seemed destined from the moment he came to the plate in the eighth inning with the Phillies and their fans beckoning Bryce to deliver in the clutch just one more time.

Rhys Hoskins also hit a two-run homer in Game 5 of the NL Championship Series to spark Philadelphia's improbable run to the pennant and a shot at its first World Series championship since 2008.

Harper, Hoskins & Crew are coming for a most improbable World Series championship.

Houston held a 3-0 lead over the New York Yankees in the ALCS. Game 4 is Sunday night in New York. The World Series will begin Friday night at the home of the AL champion.

Harper was named NLCS MVP, and he as parked the trophy on a dais, he made it clear he wanted so much more.

"I don't really care about this but MLB is making me do it," Harper said.

Philadelphia trailed 3-2 when J.T. Realmuto began the eighth with a single off reliever Robert Suarez. Harper then lined a 2-2, 98 mph sinker the opposite way, into the left-field seats as another sellout crowd of 45,485 shook the stadium.

Harper hoped the homer set the stage for other highlights on deck in the next couple of weeks.

"We've got four more," Harper told the fans during an on-field celebration, and they roared again.

The lefty-swinging Harper connected off a righty — the Padres had left-handed closer Josh Hader warming in the bullpen, but didn't bring him in.

"It's a thought at this point, but that wasn't what we were thinking," Padres manager Bob Melvin said. "We were trying to get to four-out position for Hader, and we had a lot of confidence in Suarez."

After contributing to the Nationals’ first championship in franchise history in 2019, Soto hit .351 in 2020 to win the NL batting title.

The Phillies felt the same way about Harper.

"Pure chaos, right? I don't think anybody was surprised," Hoskins said. "This guy has a knack for coming up in the biggest moments. It's just what he's done his whole career, and we've seen it plenty of times."

Remember, too: When Harper's thumb was broken by a pitch from San Diego's Blake Snell in late June, there were some concerns that he might not return this season.

Instead, the star who signed a 13-year contract to play in Philadelphia delivered — in this season, in this game.

Even after Harper's homer put them ahead, it wasn't an easy ending for the Phillies.

Reliever David Robertson was pulled after a pair of one-out walks in the ninth. Ranger Suárez made his first relief appearance of the season and retired Trent Grisham on a bunt and got Austin Nola — brother of Phils ace Aaron Nola — on a routine fly to finish it for a huge save.

Then it was time to party. The Phillie Phanatic swayed a National League champions flag as the postseason banger "Dancing On My Own" blared throughout the stadium. Alec Bohm and Nick Castellanos stripped off their shirts and danced in the clubhouse. Cigars were let. Cheap beer was sprayed. The alcohol puddles on the carpet rivaled the ones caused by the rain on a sloppy, gusty Game 5.

This sixth-seeded Phillies — yes, that is a thing this season — feel they're just getting started.

And the feared designated hitter can keep those streaks alive when he plays in his first World Series.

"To a certain degree, it's getting overlooked because of who he is and the star that he is," Phillies manager Rob Thomson said. "He's a guy that's a big star that's delivered. Can't say enough about that."

Philadelphia finished third in the NL East at 87-75, a full 14 games behind the 101-win Braves this season, and were the last club in the majors to make the 12-team playoff field. After a 2-0 sweep of NL Central champion St. Louis in MLB's newly created wild-card round, the Phillies needed only four games to knock out Atlanta, the defending World Series champs.

Now they'll try to become the first team that finished in third place to win a World Series.

The Padres took a 3-2 lead in a sloppy seventh inning as rain pounded Citizens Bank Park and turned portions of the infield, notably around third base, into a mud pit.

But it was Phillies reliever Seranthony Dominguez's slippery grip that cost the Phillies.

Starter Zack Wheeler was fantastic again and struck out eight over six innings. He was lifted with a 2-1 lead after Jake Cronenworth hit a leadoff single in the seventh and tipped his cap as he walked off the mound to a standing ovation.

Dominguez couldn't find his feel with the ball as the rain picked up, puddles formed near third base and the infield dirt turned to mush. He threw one wild pitch and Josh Bell lined a tying RBI double to right that made it 2-1. Dominguez recovered to strike out the next two batters with pinch-runner Jose Azocar on second base.

Azocar moved to third on a wild pitch and scooted home for the 3-2 lead on Dominguez's third wild pitch of the inning. The righty reliever threw only three wild pitches in 51 innings all season -- then uncorked three in the seventh.

Hoskins, Harper, Wheeler have left a trail of indelible moment at Citizens Bank as they improved to 5-0 at home, where they will play World Series Games 3, 4 and 5.

Game 5 of the NLCS was no exception.

The Phillies caught a break when in the third after Kyle Schwarber was called out a two-out stolen-base attempt. Schwarber never budged off the base, adamant that second baseman Cronenworth never tagged him. Phillies fans howled in delight as the replay on the big screen showed repeatedly that Cronenworth whiffed on the tag attempt. The call was overturned on replay, and the Phillies had new life.

Hoskins, who came hitting a quite memorable .171, smashed one into the left field seats off starter Yu Darvish as the crowd went wild. He hopped down the line as he mouthed some words to his teammates in the dugout and twirled his bat -- not unlike the steadily-spinning rally towels -- as he gave them a 2-0 lead.

Wheeler gave up Soto's solo homer in the inning that made it 2-1. Padres pitcher Joe Musgrove snapped a Polaroid photo of Soto in the dugout.

Try as they might, the Padres weren't ready for their close up.