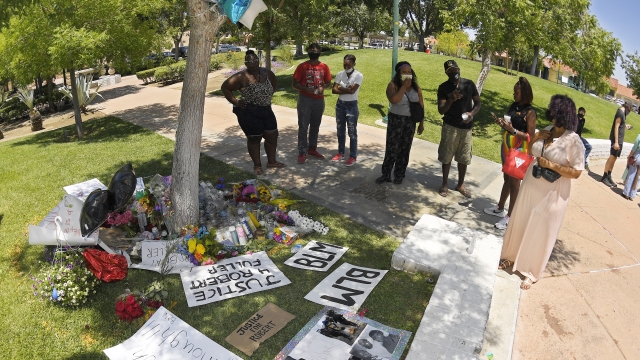 SMS
Series Of Hanging Deaths Spark Speculation About Potential Lynchings
By Johannah Grenaway
By Johannah Grenaway
June 23, 2020
Some deaths have been confirmed to be suicides, though activists and family members are concerned others could be lynchings.
SHOW TRANSCRIPT

Speculation has swirled around five recent hanging deaths that were all initially ruled suicides. Activists and family members are concerned that those deaths may have been lynchings amid national outrage and demands for racial justice.

Harsch's family, which was publicly skeptical about the initial ruling, said Friday that he had taken his own life after they reviewed surveillance video with police confirming there was no foul play. As Newsy has previously reported, Harsch's girlfriend also told a 911 dispatcher that he had hanged himself. However, the coroner is waiting on toxicology results before officially assigning the cause and manner of Harsch's death.

For Alexander, Rosas and the teenager, the cause and manner of death have been confirmed to be suicide by hanging. Those cases are also still under investigation. The family of Rosas, who was found dead in Houston, say the man was suicidal. And authorities in Houston say they reviewed video evidence in the 17-year-old's case and that he had a history of suicide attempts.

Nagy Youssef, an associate professor at Augusta University's Department of Psychiatry and Health Behavior, told Newsy there are many factors that can lead to suicide and that investigation in these cases is crucial.

"We should be alarmed for any suicide and every suicide. But again, we have to investigate them thoroughly and correctly. ... And, of course, it depends on the individual stories and what exactly happened to be able to discern suicide versus homicide, and, of course, pathology and autopsy and all of that stuff."

And history professor Fitzhugh Brundage at the University of North Carolina at Chapel Hill agreed there should be deeper investigations.

Fuller's family maintains he was not suicidal even though authorities say they haven't found evidence of foul play. Fuller marched in Black Lives Matter protests just days before he was found hanging in Palmdale, California.

The speculation that these deaths were hate crimes comes in light of recent protests and America's gruesome history of lynchings, which is tied directly to racial terrorism toward the Black community. Brundage noted that the distinction of lynchings being public is important because they are meant to intimidate Black people.

"I think we're in a moment in time when the American population recognizes the interconnectedness of all of theses forms of violence, and so at a time where we have African Americans subject to police brutality captured on film, subject to harassment by Whites captured on film, and then we have instances of African American men hanging in public. It's entirely predictable that people would ask: 'Are these lynchings?'"

State and federal authorities are still monitoring the open investigation into the circumstances of Fuller's death. Officials have not determined the cause or manner of death at this point.