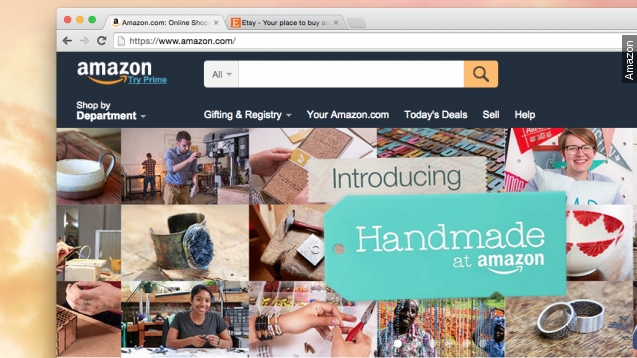 SMS
Handmade At Amazon Might Unravel Etsy
By Leah Becerra
By Leah Becerra
October 8, 2015
Handmade at Amazon launched Thursday, and the new marketplace could replace Etsy, which has already had a rough year.
SHOW TRANSCRIPT

Etsy might be a little on edge Thursday after Amazon announced it's encroaching on the handmade marketplace's space.

Amazon will now be selling handmade goods by artisans from more than 60 countries around the world. It's called Handmade at Amazon.

The new service seems a whole lot like Etsy, but Amazon could actually end up being way more succesful.

Etsy had its initial public offering in April, and on the first day, things were looking great. The site's share price more than doubled the same day of the IPO, earning some investors near a 90 percent gain on their investment.

Fast-forward to this week: The price has dropped from that record high of $30 to closer to $13 a share.

And now, this news that Amazon, the king of selling goods online, will be in direct competition with Etsy probably isn't helping to restore investor confidence.

Because Amazon, though it won't disclose the actual number, could have as many as 60 million to 80 million global subscribers. That's according to a survey released last month by RBC Capital Markets.

What's more impressive is those subscribers could actually be outspending non-Prime members by more than 2-to-1. Reports indicate about 70 percent of members who've been in the program for four years spend more than $800 annually. (Video via Amazon)

So, that's potentially a whole lot of buyers loyal to Amazon — not Etsy. But Etsy still has one thing Amazon doesn't:

"We've built a place that's about connection as much as it's about transaction," said the narrator in an Etsy promotional video.

And you can't put a price on a connection — right?