'Hamilton' Cast Members Performed At The White House, And It Was Epic 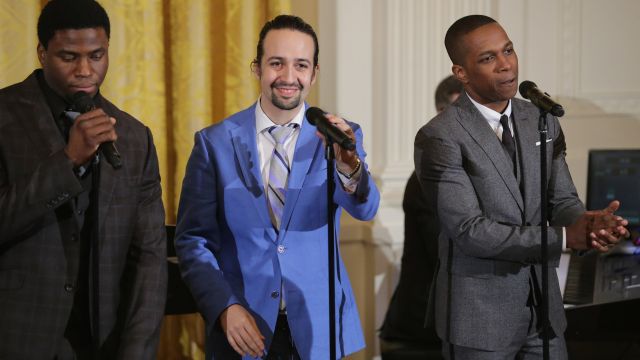 SMS
'Hamilton' Cast Members Performed At The White House, And It Was Epic
By Katie Link
By Katie Link
March 14, 2016
The mastermind behind the Broadway hit met the Obamas at a poetry jam at the White House in 2009.
SHOW TRANSCRIPT

Cast members from the Broadway hit "Hamilton" performed in the East Room.

"Hamilton" is killing it on Broadway in New York City. So much so that tickets are nearly impossible to find.

And the show is taking home major prizes. It won best musical theater album at the Grammys and recently picked up the Kennedy Prize for Drama Inspired by American History.

The man behind the hip-hop masterpiece is Lin-Manuel Miranda. The Obamas met him at a poetry jam at the White House seven years ago.

And apparently the Obamas took a liking to him.

"This show brings unlikely folks together, and Lin-Manuel, if you have any ideas about a show about Congress, for example, now’s your chance. We can use the help," President Obama said.

And in case you missed it, this video showing Miranda's freestyle rap was posted on the White House's Twitter account later in the day.