Missile Strikes Could Jeopardize Hopes For A Gaza Ceasefire 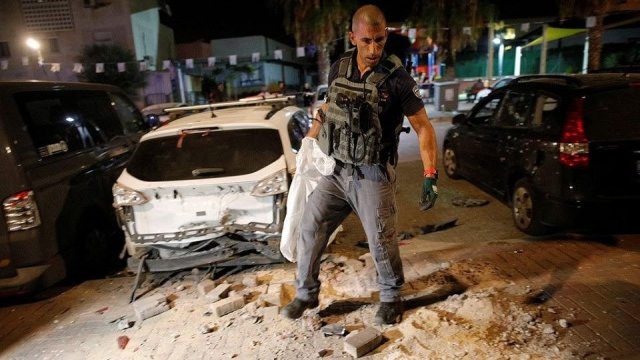 Israel and Hamas are trading blows near the Gaza border, which could imperil ongoing ceasefire negotiations.

Israel and Hamas sent hundreds of airstrikes, rockets and mortars back and forth near the Gaza Strip on Thursday in spite of ongoing ceasefire talks between the two sides.

The Israel Defense Forces says Hamas targeted cities in Israel with around 180 rockets and mortars. Most of the strikes were intercepted or hit bare land, but at least seven people were injured in the blasts.

Israel says it hit more than 150 targets in Gaza with airstrikes in response. Palestinian health officials say three people were killed in the attacks: a Hamas fighter, and a pregnant woman and her 18-month-old daughter.

The violence could jeopardize ceasefire negotiations between Israel and Hamas, which are being hosted by neighboring Egypt. The Turkish media outlet Anadolu Agency reports the two sides hope to have a final deal by the end of August.

House Members Look To Get Data On Hezbollah

Members of Congress are hoping to get concrete data about Hezbollah's arsenal in order to figure out how to approach the issues in the Middle East.

The potential deal could see Egypt and Israel easing the ongoing blockade of Gaza, giving the region some much-needed relief. Hamas might hand over two captive Israelis and the remains of two soldiers to Israel in return.

But the sporadic attacks risk turning up political pressure and pushing two sides toward another major conflict. The last big military clash in the region killed more than 2,000 people, most of them Palestinian.