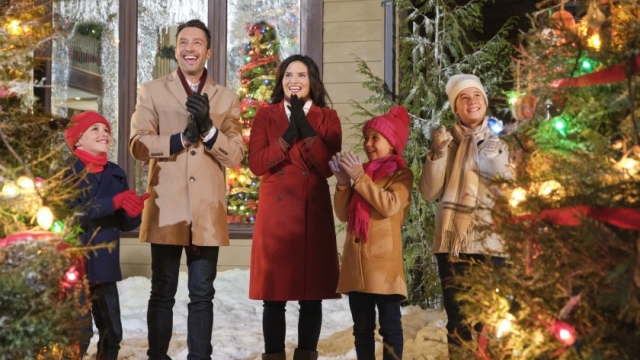 It's that time of the year again: Christmas movie season! The holiday-focused genre entirely devoted to people finding love in their hometowns, saving small businesses from big city corporations and, most importantly, spreading the spirit of Christmas.

Thom Crowe, co-host of "Tis The Podcast": "It's just something my mom and I bonded over. We spent a lot of time watching Christmas movies."

The writer behind "The Hall(re)mark": "I started watching them with my family just to kind of poke fun at them, which seems mean now, but I accidentally fell in love with them."

No other company revels in this genre better than Hallmark. The company releases 40 new Christmas movies every year for its "Countdown to Christmas" series.

Christmas is Hallmark's biggest present, with total viewership in the tens of millions, particularly women. Already, the network says it has seen 35 million viewers since October.

Brandon Gray, co-host of "Deck the Hallmark": "I love Christmas. I love it. I mean, I'm wearing a sweater in November. I'm ready to go."

Crowe: "We have a Facebook group. We have a Discord. We have a Reddit. … We're continually engaging with way more people than we anticipated ever."

We found dozens of year-round blogs, podcasts and fan groups about Hallmark and Christmas movies, from projects like "Tis The Podcast," a show and online community about Christmas movies in general; "The Hall(re)mark," a one-woman recap and review blog; and "Deck The Hallmark" — a viral podcast that started an entire network of other entertainment shows.

Gray: "If I can be honest, it was just a prank against Dan here, because I knew he'd hate them.

Daniel Thompson, co-host of "Deck the Hallmark": "It's a prank that's lasted three years. And it's become a full-time job."

"The Hall(re)mark": "I was genuinely shocked to find out that there were dozens of podcasts, other blogs. And it was really cool to meet other people who actually love them, because I can't talk about them to my friends."

Both fans and critics of the genre do recognize that most of these films … have their flaws. They all recognize they can be a little over-the-top, repetitive and very predictable.

Crowe: "We've all joked about creating a formulaic Hallmark Christmas movie script together. Or setting up an AI robot or an AI machine to do the same thing."

But at the end of the day, these movies are also comforting to fans — a reminder of all the joy surrounding the holiday season.

Thompson: "I do give Hallmark movies a hard time. And we put them under a microscope they have no business being put under, because they are someone's comfort food."

"The Hall(re)mark": "Christmas has always been a way for me to relax. And these movies are so low stakes."

And so, with dozens of new titles coming out every year, we asked: What makes an actually good Christmas movie?

"We have something called 'The Linus Test.' And it goes back to a 'Charlie Brown Christmas' where Linus gets on stage and explains to everyone what Christmas is all about."