Haley: The US Will Remember Today's UN Vote 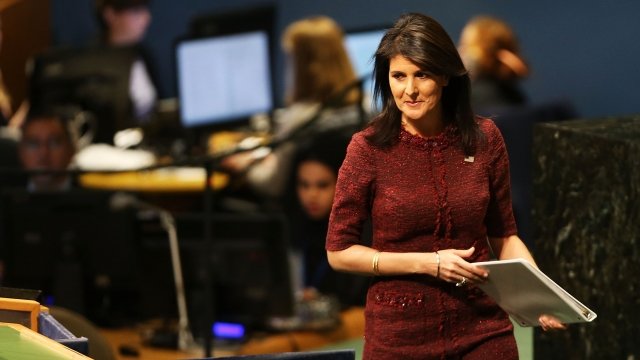 The U.N. General Assembly took a hard stance against the United States today, and that could affect the country's attitude toward foreign aid.

Both President Donald Trump and U.S. Ambassador to the U.N. Nikki Haley levied threats against the countries that condemned the U.S.' decision to recognize and move its embassy to Jerusalem.

"This vote will make a difference on how Americans look at the U.N. and on how we look at countries who disrespect us in the U.N.," Haley said. "And this vote will be remembered."

The Guardian notes that Haley's notebook contained the names of the 128 countries that voted to condemn the U.S.' decision. Some of the countries on that list include Egypt, the fourth biggest recipient of U.S. military funding, as well as Ethiopia and Nigeria, two of the top recipients of U.S. Agency for International Development money in 2016.