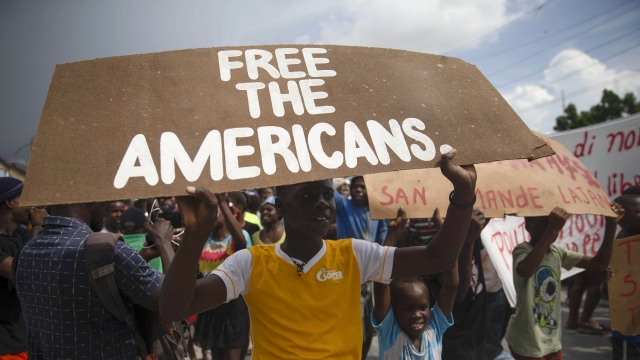 The leader of the 400 Mawozo gang that police say is holding 17 members of a kidnapped missionary group is seen in a video released Thursday saying he will kill them if he doesn’t get what he’s demanding.

He also threatened Prime Minister Ariel Henry and the chief of Haiti’s National Police, Léon Charles, as he spoke in front of the open coffins that apparently held several members of his gang who were recently killed.

Earlier this week, authorities said that the gang was demanding $1 million per person, although it wasn’t immediately clear that included the five children in the group, among them an 8-month-old. Sixteen Americans and one Canadian were abducted, along with their Haitian driver. The missionaries are with Ohio-based Christian Aid Ministries.

The organization later issued a statement saying it would not comment on the video “until those directly involved in obtaining the release of the hostages have determined that comments will not jeopardize the safety and well-being of our staff and family members.”

The same day that the missionaries were kidnapped, a gang also abducted a Haiti university professor, according to a statement that Haiti’s ombudsman-like Office of Citizen Protection issued on Tuesday. It also noted that a Haitian pastor abducted earlier this month has not been released despite a ransom being paid.

In addition to kidnappings, the gangs also are blamed for blocking gas distribution terminals and hijacking supply trucks, which officials say has led to a shortage of fuel. Many gas stations now remain closed for days at a time, and the lack of fuel is so dire that the CEO of Digicel Haiti announced on Tuesday that 150 of its 1,500 branches countrywide are out of diesel.