Haiti Caught Between Earthquake And Storm 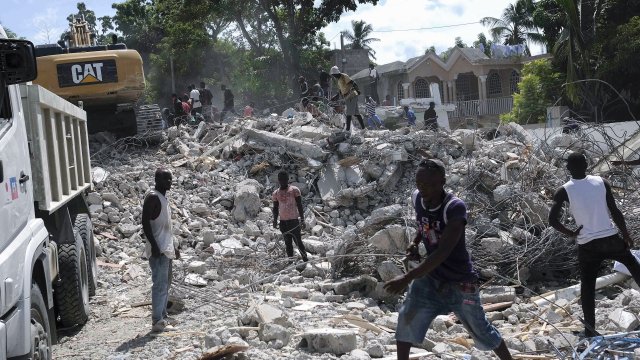 SMS
Haiti Caught Between Earthquake And Storm
By Haley Bull
By Haley Bull
August 16, 2021
The Dept. Of Defense is providing air support to help navigate over blocked roads. The U.S. Coast guard is working to transport those injured.
SHOW TRANSCRIPT

Haiti says the death toll after a 7.2 magnitude earthquake struck the region over the weekend is now up to more than 1,400. The country has declared three days of mourning for those lost starting Tuesday.

The earthquake left piles of rubble, blocked roadways, collapsed buildings and people rushing in to help those hurt and looking for survivors. Haiti reports nearly 7,000 people were also injured, with tens of thousands of homes destroyed and families affected.

"It was incredibly, incredibly scary," said Sarah and Kivins Charles.

They are missionaries with Jeremie Christian Mission. They said they heard the rumble before they felt it, quickly trying to get their young son and others out of the building.

"The majority of the homes in our area stood firm which we're incredibly blessed to say. There were a lot of injuries our hospital was overrun the last couple days," said Sarah.

The mission is one that works with Agape Flights, a non profit that delivered supplies to organizations Sunday throughout the country.

"What I did see were the people who were affected by it. There were multiple people at the airport waiting for transport," said pilot Jeff Yannucciello.

Government agencies, including U.S. teams, are working in the aftermath. The Department of Defense is providing air support to help navigate over blocked roads and bridges. The U.S. Coast Guard is working to transport those injured to crucial care.

"So for the most part that means getting out towards the southern claw and moving those patients, and many of them are children, to that high level of care in Port-au-Prince. Likewise we're moving personnel to those impacted areas as well to start looking for survivors," said USCG Lt. Commander Jason Neiman.

But amidst the efforts, Tropical Depression Grace threatened to bring heavy rains and the potential of flooding and mudslides across the already hurting region Monday night.

"It's a lot of concerns in terms of just the recovery efforts right. Some people have lost their homes and not able to stay in their homes," said MarieGuerda Nicolas, Ph.D.

Nicolas is a professor with the University of Miami. She was born in Haiti, visiting the country at least once a month to see family and work with a community foundation she helped found.

In the aftermath, she said buying from Haitians in Haiti and working with organizations on the ground is key.

"I hope that the message is that the Haitians are not sitting waiting for help but that Haitians are also taking on the lead to make sure that they're helping their brothers and sisters on the ground," Nicolas said. "The fact Haiti continues to be standing is important. I think it's an important element. It's a testament to the spirit of the people."