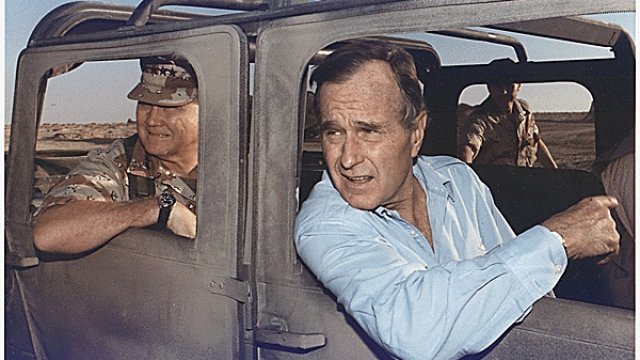 Bush took office at the tail end of the Cold War. He signed the START 1 treaty in 1991 to reduce the competitive buildup of nuclear weapons between the U.S. and the U.S.S.R. The Soviet Union would formally dissolve months later.

The collapse of the Soviet Union shook up the international order and gave the U.S. more prominence on the world stage. Bush took full advantage of the moment.

He told Congress, "Iraq must withdraw from Kuwait completely, immediately, and without condition."

When Iraq's leader, Saddam Hussein, invaded Kuwait, Bush assembled an international coalition of nations to lead a U.N.-approved battle against him. After weeks of airstrikes and a major four-day ground offensive, Operation Desert Storm succeeding in defeating the Iraqi forces in Kuwait.

The operation was a resounding victory for Bush and set a template for U.S. interventions: multilateral, swift and limited. Bush later wrote he stopped short of deposing Hussein to avoid turning the U.S. into "an occupying power in a bitterly hostile land."

At the end of the Panama invasion, Bush said, "The Panamanian people want democracy, peace, and the chance for a better life and freedom."

Noriega would eventually surrender to the U.S., where he was imprisoned on drug trafficking charges. The invasion was popular in the U.S. at the time, but it was condemned abroad as a violation of international law. Rights groups allege thousands of civilians were killed by U.S. bombing raids.

Panama and the Gulf War solidified the idea that the U.S. could secure both its interests and international order through swift, decisive military action. Today, with the U.S. bogged down in Iraq, stuck in Afghanistan and sidelined in Syria, Bush's foreign policy ideals seem more and more distant.