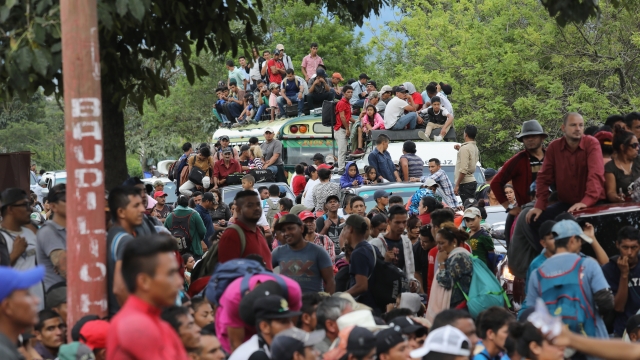 SMS
Guatemalan Court Blocks Signing Of 'Safe Third-Country' Agreement
By Katherine Biek
By Katherine Biek
July 15, 2019
Under such a deal, migrants journeying through Guatemala en route to the U.S. would be forced to apply for asylum in Guatemala instead.
SHOW TRANSCRIPT

The court's decision came the same day Morales' office said he was postponing his trip to Washington, D.C. to meet with President Donald Trump. That visit had been scheduled for Monday.

In its statement, the Guatemalan government said the reason for the cancellation was that the Constitutional Court hadn't yet ruled on legal challenges to the potential agreement.

President Trump asserted in June that Guatemala was preparing to sign the Safe Third-Country Agreement with the U.S. Under that agreement, Central American migrants journeying through Guatemala en route to the U.S. would be forced to apply for asylum in Guatemala instead.

But on Sunday, Morales' office said that it's never "contemplated signing an agreement to convert Guatemala into a safe third country."

It's not surprising that such an agreement is unpopular in Guatemala. A recent survey by Vanderbilt University's Latin American Public Opinion Project says one-in-four Guatemalans want to leave the country themselves. Most hope to make it to the U.S.

It's unclear if Guatemala will reschedule Morales' visit with President Trump now that the Constitutional Court has issued its injunction.