Juan Guaidó Calls For 'Direct Communication' With US Military 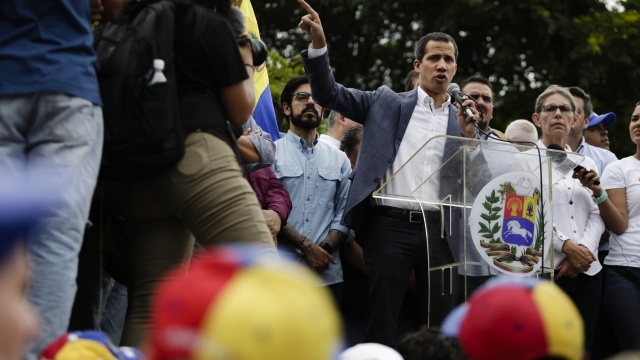 SMS
Juan Guaidó Calls For 'Direct Communication' With US Military
By LeeAnne Lowry
By LeeAnne Lowry
May 12, 2019
This comes less than two weeks after Guaidó's failed attempt to overthrow the current government in Venezuela.
SHOW TRANSCRIPT

Venezuelan opposition leader Juan Guaidó said at a rally on Saturday that he's asked his envoy in Washington for "direct communication" with the U.S. military.

This comes less than two weeks after Guaidó's failed attempt to inspire the Venezuelan military to side with him against President Nicolás Maduro's regime.

A quick refresher: In January, Maduro was sworn in for his second term, but the election is widely considered illegitimate. Guaidó, the head of the National Assembly, invoked a little-known constitutional rule that allowed him to declare himself interim president until a fair election can be held.

The Trump administration strongly backs Guaidó and has said all options are on the table. But it has never openly committed to military intervention.