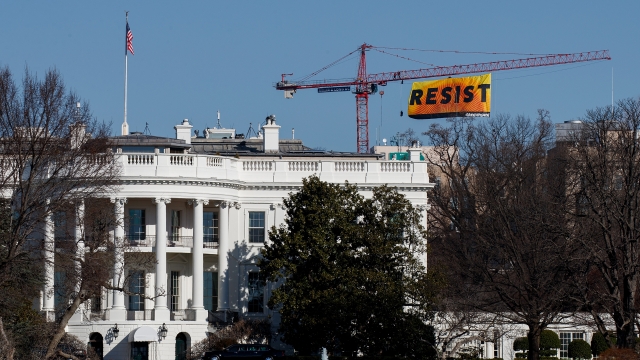 "If the system is broken, then it's our responsibility to fix it, and that's why we're out here today," activist Nancy Pili said from atop the crane.

The protesters unfurled a large yellow banner that said "resist." It appeared to be hanging over the White House.

The crane the activists climbed is on a construction site where Fannie Mae offices are being built. It's about four blocks from the White House. The activists said they were getting "high-fives and thumbs up" from the operators of another nearby crane.

In social media posts made from atop the crane, the climbers spoke out about a variety of President Donald Trump's policies, including the use of nuclear weapons and immigration.

Streets around the crane were closed as emergency crews tried to get the activists down. The Washington, D.C., police department tweeted, "While we respect everyone's right to protest, today's actions are extremely dangerous and unlawful."