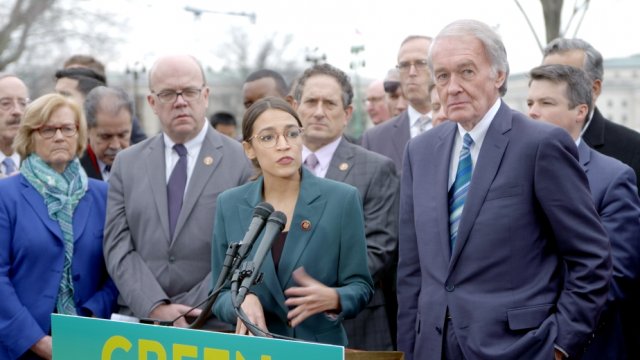 Democrats have introduced a "Green New Deal" that takes ambitious steps to fight climate change. And proponents of the plan say it would address economic inequality just as much as the environment.

"One of the reasons why low-income communities do not have access to renewables is because of what our default is. Our default is fossil fuels," said U.S. Rep. Alexandria Ocasio-Cortez, who introduced the plan with U.S. Sen. Ed Markey on Thursday.

Supporters of the Deal argue the transition from fossil fuels to renewable energy could help the low-income communities most at risk for climate change. Those areas tend to take longer to bounce back from natural disasters and are more exposed to environmental hazards.

But it goes beyond providing clean energy sources to fix inequality. It also features a controversial economic proposal that could drastically change the way Americans work.

That proposal is a federal jobs guarantee, which would offer employment to any American in need of a job. Proponents say it's cheaper than unemployment and would increase GDP, but opponents claim it would cost too much money and damage the incentive to work.

And while it doesn't explicitly make mention of universal basic income, the Green New Deal does state one of its goals as providing "economic security for all who are unable or unwilling to work."

But before any of it is even considered, the Deal's supporters will have to garner more backing within their party. While some Democratic presidential candidates have expressed support for it, only 60 members of the House and nine senators have co-sponsored the plan.