Grab Your Passport! A Wine Theme Park Is Opening In France 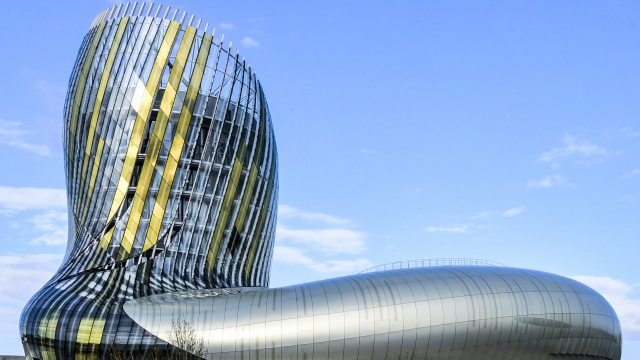 Pack your passport and your taste for wine.

You're looking at La Cité du Vin — or the City of Wine — which opens June 1. Perhaps it shouldn't come as any surprise that it's located in Bordeaux, France — a popular destination for wine enthusiasts.

The City of Wine is like a museum but doesn't "follow the classical rules" of one, according to its website. That's one reason many are referring to it as a theme park.

The building, which was designed to look like wine swirling in a glass, houses 20 high-tech exhibits that discuss the culture and history of wine from around the world.

The tour ends, of course, with a wine tasting at the top of the building. It has a 360-degree view of the city and surrounding vineyards.

Like most museums, there's a gift shop, but they're calling it a boutique. There's also a restaurant and a wine bar. The wine cellar boasts 14,000 bottles from 80 different countries.

Americans have played a role in fundraising for the project, which includes an auditorium named after third U.S. President Thomas Jefferson. Why Jefferson? He loved wine and lived in Paris for five years in the 1780s.

Visitors won't have to worry about finding a babysitter, either. Tours can accommodate children 8 and older. The website says, "More than just a drink for adults, wine is a universal heritage to be discovered at any age."

But don't worry; kids won't be tasting any wine. They'll get to see how grapes are turned into wine and do some arts and crafts projects.